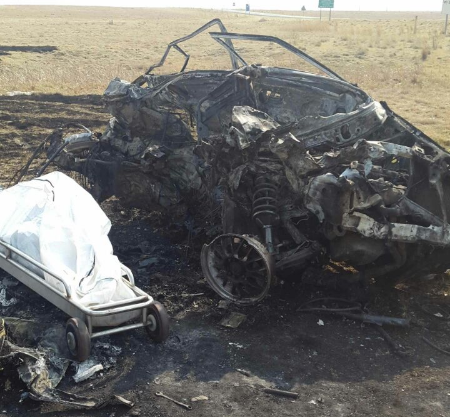 A scene of an accident in Mpumalanga where the car burst into flames.
Image: Supplied by the office of the MEC for Community Safety, Security and Liaison.

Mpumalanga authorities on Monday expressed concern over the rising road death toll in the province since the start of the long weekend.

MEC for Community Safety‚ Security and Liaison Pat Ngomane said at least 19 people had been killed in various accidents around the province since Friday.

In one of the deadliest‚ six people were killed in a head-on collision between a truck and a sedan near Kinross‚ Evander.

“Five of the deceased were burnt beyond recognition and they included a three-year-old child. All the deceased were occupants in the sedan and no serious injuries were reported among the truck occupants‚” said the department’s spokesperson‚ Joseph Mabuza.

Most fatal road accidents in South Africa happen on weekends between 4pm and 10pm.
News
3 years ago

KwaZulu-Natal MEC for Transport‚ Community Safety and Liaison Mxolisi Kaunda has appealed to police to speed up the investigation into a bus crash ...
News
3 years ago

In another incident‚ three foreign tourists were killed in a crash between Lydenburg and Dullstoom. “[The] deceased are believed to be Brazilian nationals. They were burnt beyond recognition after their vehicle caught fire on impact‚” said Mabuza.

Ngomane called for action to be taken by traffic officers.

“Ngomane has reiterated that the department will not watch while people die like flies on the road and ordered the management of the department to implement the flexi shift traffic officers' operation without fail‚” said Mabuza.

The flexi shift would increase the number of hours traffic officers are on the road.