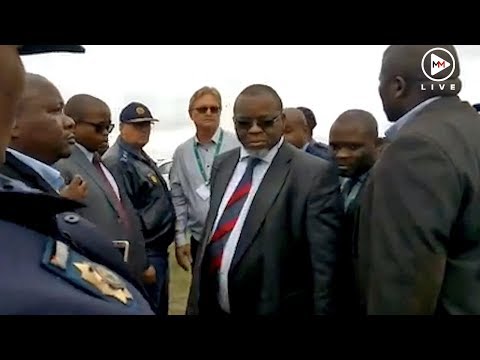 Human rights attorney Richard Spoor was arrested after a heated fracas with mineral resources minister Gwede Mantashe on the Wild Coast, which reportedly ended with tear-gas fired against anti-mining protestors on Sunday.

Spoor‚ who represents members of the Xolobeni community who are opposing an Australian-backed venture to mine ilmenite and other heavy minerals on community land south of the Wild Coast Sun Casino‚ was arrested on Sunday.

A video clip from the scene showed Spoor‚ shortly before his arrest‚ engaged in a heated discussion with Mantashe outside a large marquee erected during the minister’s weekend tour to KwaZulu-Natal and the Eastern Cape to address community tensions over several coal and dune mining ventures.

“Don’t call me a liar please! I am trying to help you. If you work with us we can work together to solve problems‚” Spoor told Mantashe in the clip.

Mantashe responded: “Okay. But you are disrupting my meeting.”

Attorney Johan Lorenzon told TimesLIVE that Spoor was released on warning on Sunday afternoon after being charged with “incitement” under the Riotous Assemblies Act and was due to appear in the Bizana Magistrate’s Court on Tuesday.

A second video clip from the scene showed police forming a defensive line to prevent members of the Amadiba Crisis Committee (ACC) from entering a large tent where Mantashe was addressing a meeting near Xolobeni village.

The committee claimed that Mantashe was seeking to impose a "pre-cooked pro-mining propaganda” agenda at the meeting‚ without allowing opportunities for engagement by those opposed to mining.

The proposed mining project has led to bitter divisions within the community‚ following several violent clashes – which has included the unsolved murder of prominent anti-mining leader Bazooka Radebe in 2016.

Responding to queries about the circumstances preceding Spoor’s arrest‚ a spokesman for the department of mineral resources said: “In short‚ discussions were positive. All parties present were given an opportunity to present their views either for or against mining‚ including a representative of the ACC.

“It’s unfortunate that that a small group of people were instigated to disrupt and suppress discussions‚ but the meeting proceeded as planned. Following this visit the minister now has first-hand knowledge and understanding of the issues in Xolobeni and will be able to take a more informed decision moving forward.”

On why Spoor was arrested‚ the department said: "Kindly contact Mr Spoor or the local police for comment regarding his arrest.”

But the anti-mining committee painted a different picture of events on its Facebook page.

“This is what has just happened in Xolobeni today: The minerals minister Gwede Mantashe was supposed to engage with the Amadiba Crisis Committee and coastal residents to hear their concerns about mining the Wild Coast.

“However he arrived with Zanuzuko Sigcau‚ the claimant king of amaMpondo‚ and the Mayor of Bizana to impose what was quite clearly a ‘precooked meal’ - a pro mining propaganda exercise. The programme also indicated that it was about officials simply presenting to community‚ with little allowance for real engagement.

“The ACC objected to having Zanozuko and Chief Lunga Baleni on the podium and in the programme.... There was a very heavy police presence‚ with full riot gear seemingly aimed at intimidating the ACC who were protesting peacefully but loudly‚ singling songs and toyi-toying against the mining.

“One of the community's lawyers‚ Richard Spoor‚ tried to approach the podium to try and talk to Gwede and to police commissioner Swartz (Schwartz) to try and defuse the situation but was forcibly removed from the tent which only served to escalate the conflict. Stun grenades and tear gas were then used to disperse the ACC supporters (in other words‚ most of the Amadiba coastal community).

“They regrouped outside the tent and continued to sing and dance. The tear gas affected Nonhle Mbuthuma and other ACC members but no one has been injured.”

The anti-mining committee claimed that about 400 people were bussed in “from outside to try and dilute the ACC members.

“The ACC members then tried to go back to the tent where the meeting was continuing but were blocked by police from entering. In other words‚ the meeting about mining did not include the very people it would affect.”

In a WhatsApp message posted from the meeting‚ a witness claimed that committee member Nonhle Mbuthuma was “tear-gassed in the face”.

“Richard ran to the podium to take (the) microphone to explain what is happening. Then police stopped him‚ then some people started beating him with chairs. Then he was taken away. Gwede followed to talk to him‚ alleging that he is disrupting the meeting.”