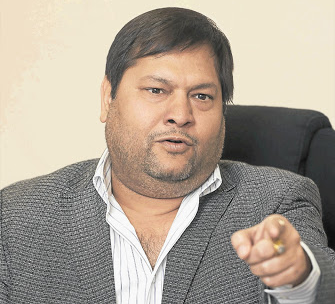 In a 42-page affidavit before the Zondo Commission of Inquiry into state capture‚ the Gupta brother disputes several claims Vytjie Mentor made in her testimony.
Image: Times Media

Ajay Gupta has dismissed as “fiction” ex ANC MP Vytjie Mentor’s evidence that he offered her a ministerial position and lists several reasons why she was lying‚ including her statement that she was offered mutton curry when they met.

In a 42-page affidavit before the Zondo Commission of Inquiry into state capture‚ the Gupta brother disputes several claims Mentor made in her testimony.

“Significant cross-examination will be necessary”‚ Ajay states‚ after pointing out that there were “substantial disputes” between Mentor’s testimony and the Guptas’ response to it.

Ajay does however admit that he and his brother Rajesh “attended the events forming part” of Zuma’s state visit to China in 2010.

“We did so‚ together with other delegates from our group of companies…My team’s business meetings were arranged by the consulting company Cadiz and were not part of the state visit programme.”

But he denies Mentor’s evidence that Duduzane introduced his brother Rajesh‚ as well as controversial Arms Deal advisor Fana Hlongwane‚ to her on a flight to China.

He also disputes that the Guptas were‚ or claimed to be‚ part of Zuma’s “advance team” to China‚ or were in any way involved in his security or logistics arrangements.

Ajay’s application for cross-examination was dismissed. It is the first time his affidavit regarding Mentor and also former government communications head Themba Maseko has been released to the public.

“I deny that I claimed to be able to discipline any government official who failed to carry out my demands‚” he states‚ adding that he knew “nothing of and was not involved in (in the event that it took place) any phone call made by then president Jacob Zuma to Mr Maseko on the day he came to see me at Saxonwold”.

Maseko testified that Zuma had asked him‚ during that call‚ to “help” the Guptas.

Ajay says he did meet Maseko but the purpose of the meeting was “to get clarity on the policies and practices of the GCIS in the awarding of (government) advertising”.

In a surprise announcement on Thursday‚ Deputy Chief Justice Raymond Zondo said he would like former president Jacob Zuma to respond to allegations ...
News
3 years ago