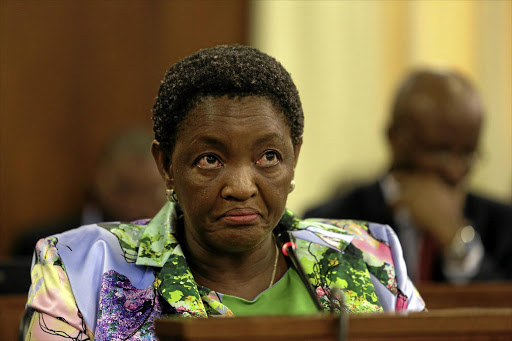 The Constitutional Court has described former social development minister Bathabile Dlamini’s conduct as “reckless and grossly negligent”‚ saying she failed to disclose information before an inquiry into her role in the social grants debacle.

On Thursday‚ the apex court found that Dlamini should be personally liable for 20% of the legal costs of the Black Sash Trust and Freedom Under Law application‚ including costs of two counsel.

The court ordered that the former minister‚ the SA Social Security Agency (Sassa) and its CEO pay 80% of the legal costs in their official capacity.

The court also directed that the Director of Public Prosecutions make a call on whether Dlamini should be prosecuted and charged for perjury for lying under oath.

The finding was made by the Constitutional Court in a unanimous judgment‚ penned by Justice Johan Froneman. In it‚ Dlamini was criticised for her role in the handling of the Sassa debacle.

The court also directed that copies of the judgment and the findings of an inquiry headed by Judge Bernard Ngoepe – held to determine Dlamini's role in the social grants saga – be forwarded to the Director of Public Prosecutions to consider whether she lied under oath and should be prosecuted for perjury.

'Women in the ANC are on their own' - Bathabile Dlamini

Minister of women in the presidency Bathabile Dlamini on Thursday criticised patriarchy within the ANC‚ saying women in the ANC were “on their own”.
Politics
3 years ago

Ngoepe had earlier criticised Dlamini for her testimony during the probe. TimesLIVE reported in May that Ngoepe had said that:

“She was too evasive to some questions. She would answer questions with questions‚” Ngoepe said.

The inquiry was ordered by the Constitutional Court to determine culpability around the social grants crisis.

Dlamini was accused of failing to ensure that Sassa was equipped to administer social grants after a contract with Cash Paymaster Services (CPS) was due to expire. The court was forced to extend the contract‚ even though it had been found illegal.

“The inquiry report’s finding that the minister’s failure to disclose this information was her fear of being joined in her personal capacity and being mulcted personally in costs has not been‚ and cannot be faulted.

The Constitutional Court on Thursday held that former social development minister Bathabile Dlamini should not be held personally liable to pay costs ...
News
3 years ago

Retired Judge Bernard Ngoepe has criticised former social development minister Bathabile Dlamini for her testimony during a probe into her conduct in ...
Politics
3 years ago

“The inference that she did not act in good faith in doing so is irresistible. At best‚ her conduct was reckless and grossly negligent. All that is sufficient reason for a personal cost order‚” the court ruled on Thursday.

The court found that it was proper that Dlamini‚ in her personal capacity‚ bear a portion of the legal costs.

“It would account for her degree of culpability in misleading the court - conduct which is deserving of censure by this court as a mark of displeasure - more so since she held a position of responsibility as a member of the executive‚” said Justice Froneman.

The court noted that the report by retired Judge Ngoepe who chaired the inquiry‚ revealed that Dlamini lied when she gave oral evidence and under oath in affidavits filed at the court.

“The registrar of this court must be directed to forward a copy of the inquiry report and this judgment to the National Director of Public Prosecutions to consider whether minister Dlamini lied under oath and whether she should be prosecuted for perjury‚” Froneman said.