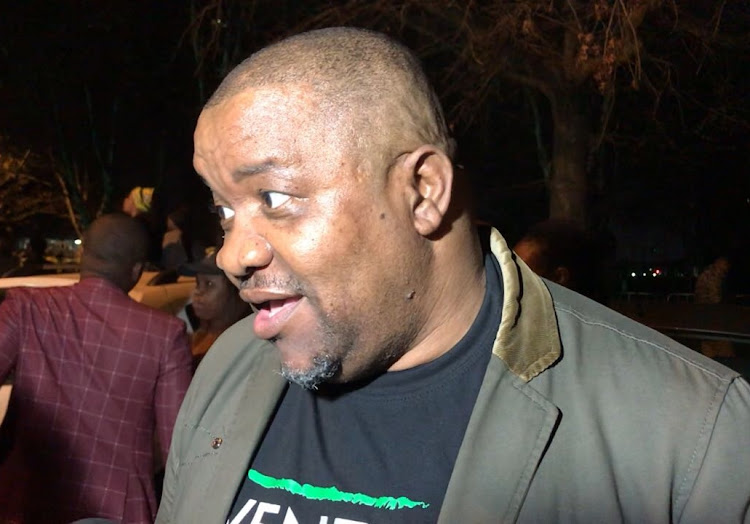 Deputy chairman of People Against Petrol and Paraffin Price Increases Bishop Timothy Ngcobo is said to have pushed a police officer and was arrested for common assault
Image: JEFF WICKS

The national deputy chairman of People Against Petrol and Paraffin Price Increases (Pappi)‚ bishop Timothy Ngcobo‚ has been arrested following a protest by the group on the M4 on Friday.

Ngcobo‚ who also leads a pro-Zuma religious support group‚ joined about 50 people and formed a human chain blocking traffic along the southbound carriageway of the Ruth First Highway.

People Against Petrol and Paraffin Price Increases Deputy chairperson Bishop Timothy Ngcobo being arrested during a protest staged by the group this morning on the M4
(Video supplied by Pappi) @yasantha @TimesLIVE pic.twitter.com/ChQWXeeqyk

The protest was in anticipation of a high fuel hike in October.

The Automobile Association (AA) has warned that the petrol price is expected to rise by R1.01 a litre next month.

“One of the group members pushed a police officer and was arrested for common assault. He will appear in court soon‚” said KwaZulu-Natal Saps spokesperson captain Nqobile Gwala.

Pappi's national convenor Visvin Reddy said that Ngcobo's arrest was unjust and they would not stop fighting against fuel increases.

“We are fighting for something important and we will not stop until government listens‚” he said.

Brace yourself for another big fuel price hike.
News
2 years ago

The newly formed People Against Petrol and Paraffin Price Increases (Pappi) has vowed to intensify its fight against the rising prices of fuel.
News
2 years ago

Tensions in the global oil market and further weakness in the rand could see consumers fork out more than R18 for a litre of petrol in the coming ...
Business
2 years ago