Timeline to disaster: What happened on the day 3 Joburg firefighters died 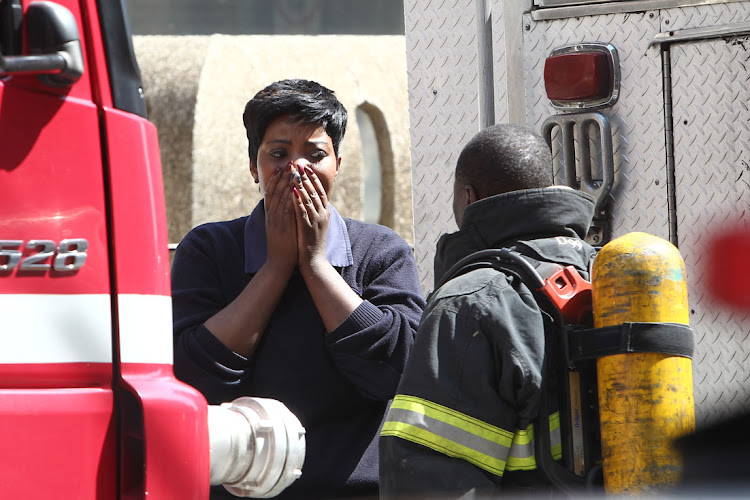 Three firefighters were killed in a fire in the Johannesburg CBD on September 5, 2018. Now their colleagues have spoken out.
Image: Thapelo Morebudi

Firefighter Muzikayise Zwane‚ who witnessed one of his crew members plummet to his death  in the Johannesburg CBD three weeks ago‚ said his wife gave birth to twin girls on Thursday.

Speaking on the sidelines of a press briefing held by his union‚ Democratic Municipal and Allied Workers Union of SA (Demawusa)‚ Zwane‚ who has two other children‚ said he almost missed the birth of his girls.

He stayed outside the burning building to man the fire engine while five of his colleagues went in to fight the blaze on the upper floors. Two of them‚ Mduduzi Ndlovu and Khathutshelo Muedi‚ died inside the building. Ndlovu burnt to death‚ while Muedi died from lack of oxygen.

A third, Simphiwe Moropana, fell to his death from the 23rd floor of the Bank of Lisbon building.

Asked how his wife felt about him going to back work‚ Zwane said: "She is not okay about it‚ but there is nothing she can do about it because they rely on me for financial support. They will just have to wait for what may come‚ when they will hear that Zwane was left behind in the fire‚ which would mean it is the end of life.

Inside the Joburg hellfire: If you didn't have a cellphone, you died

In his ears forever will ring the voice of his colleague, pleading from within the burning building: “Tebogo, please hurry. The fire is coming ...
News
2 years ago

"I have not received counselling‚ but I have had to go back to work because I am working for my family. If you don't go to work‚ you won't get paid.”

Zwane gave reporters a glimpse of how quickly things changed for the three firefighters that day.

He provided this timeline of what happened:

Firefighters received a call from the control room to the fire engine‚ informing them of a fire a few streets away from where they were. Zwane said it did not take even three minutes to get into their gear and rush there.

They arrived on the scene. He and his crew members were the first respondents.

A second crew arrived from another station. Zwane informed them that five of his members were already inside. Five firefighters from Fairview went in after them‚ while one stayed behind with Zwane.

After the second crew went in‚ people were evacuated from the building.

The first sign of trouble came. "I got a call from the crew‚" said Zwane. "He said‚ 'Zwane we are stuck now. We don't have water. The building is well alight and we don't know where to go.' I told him there were just the two of us here. I advised him to try to get on the roof.”

He received a second frantic call. "Another call came in from crew member Mahlathi. He said they were stuck there and did not have water. He said‚ ‘Muedi has collapsed’. I didn't know what to do at that time because‚ as he told me that‚ another guy had fallen from the 23rd floor‚" said Zwane.

Zwane said after this‚ he received numerous phone calls from those inside‚ saying they were stuck.

"I was also confused. I didn't know what to say now because one guy is down. I could not tell them that I had one man down here. It was going to be a problem. I had to tell them to wait‚ that we were coming and that they must find a place to hide and‚ in a few minutes‚ we would be coming‚" said Zwane. Eventually more crew members were called in.

Zwane said it took the additional crew‚ including station commanders‚ about 30 minutes to arrive. He said the station commanders stood outside the building saying they were strategising‚ but none of them assisted.

"They are (more) highly qualified than us‚ so we expected them… to rescue their guys‚ but no one went in until our fellow firefighters went in to rescue our colleagues."

Zwane told reporters he had little hope his colleague‚ Muedi‚ would be found alive because the other crew members had told him he was out of oxygen. He said while watching the burning building he thought it would only be “by God’s grace” that Muedi would make it out alive.

Zwane said he had tried over and over to call Ndlovu while he was in the building‚ but his calls were not answered.