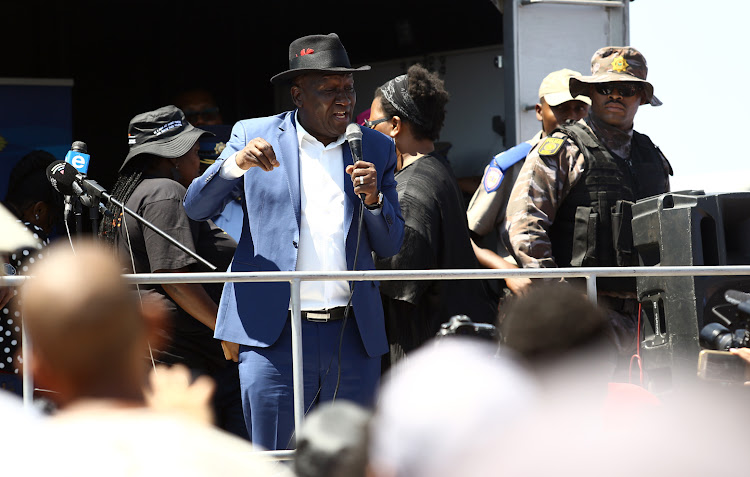 Minister Bheki Cele addresses the community of Westbury after violent clashes with the police resulting in people being arrested on October 2 2018
Image: Masi Losi

Stacey-Lee Solomon appealed to Cele to deal harshly with criminals in the Johannesburg township.

“I plead with you‚ sir‚” she repeatedly sobbed. “Our siblings don’t want to go to school anymore. We’re getting shot‚” she said.

“I think the best solution is to (introduce) new laws…if people are being raped‚ rather cut (the perpetrator’s manhood). If there is someone who murders anybody‚ rather hang them (and) those stealing even a sweet or a phone‚ cut their hand.”

She went down on her knees and repeated: “I plead with you‚ sir.”

On the other side of the troubled Westbury township‚ Cele met a grief-stricken husband whose wife was caught in a suspected gang-related crossfire. She was fatally wounded and her 10-year-old niece injured in the leg about 40m from their house last Thursday.

Enough is enough. That was the cry of a resident who is fed up with crime in Westbury‚ addressing a crowd gathered in the crime-ridden suburb of ...
News
3 years ago

In Westbury, Johannesburg, primary school children greet each other by asking: “Which gang do you belong to? Are you part of the Fast Guns or ...
News
3 years ago

Reuben Peterson also had a message for Cele after showing him his four-year-old daughter‚ who was robbed of a mother by a suspected gangster’s bullet.

“What do I say to this child?” he asked before he turned and kissed the girl on the forehead. The child sat on his lap and looked oblivious to what was happening around her.

“My wife died innocently. I hope and pray it is all not in vain and that this does not happen to another family…I hope this is the last.”

It was the killing of Peterson’s wife that plunged Westbury into chaos last Friday. The community took to the streets‚ asking the police to arrest those responsible‚ along with officers at the local police station who were allegedly in cahoots with drug lords and gangsters.

Cele’s visit to the area on Tuesday was in response to violent protests‚ which left a Rea Vaya bus station partially burnt and damaged.

After listening to members of the community at the meeting‚ Cele made a string of promises. He promised that an investigation had been instituted into the alleged behaviour at Sophiatown police station and would deliver results in a week.

“Police will investigate those you say are corrupt and we would like to work with you to give us information so we immediately act on that‚” he said.

Police Minister Bheki Cele had a meeting with the protesting community of Westbury on Tuesday October 2 2018, where he gave community members the opportunity to air their grievances, and propose solutions as well.

The police minister further promised to increase police visibility in the area.

“We have requested police to send the TRT (tactical response team) unit to be part of the community so they can be able to push back the gangs…that unit will be here as from today…to join the team of 20 that is here to patrol the streets and take on gangsters whenever they try to be hard on them‚” Cele said.

He also requested the community to give police between 48 to 72 hours to arrest two more suspects in the fatal shooting of the woman last week. Two have already been arrested.

Cele promised to come back with ministers from other departments so they could together address several issues raised by the community.

On Solomon’s plea‚ Cele said he would appeal to President Cyril Ramaphosa to invite the young woman to address parliament.

Calm had returned to Westbury late in the afternoon but simmering tensions could still be felt amid the barricaded streets and burning tyres.