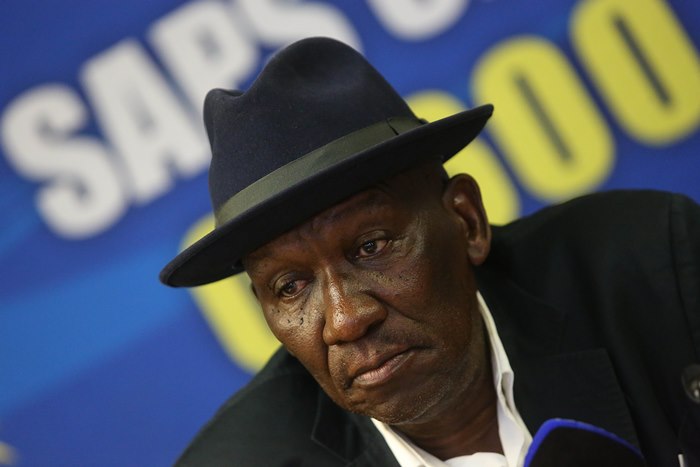 Police minister Bheki Cele said the men were likely to face other charges‚ including contravention of the Explosive Act and arson.
Image: THULI DLAMINI

Extortion is believed to be the motive behind a spate of bombings that rocked Durban earlier this year.

Police minister Bheki Cele revealed at a short media briefing held at the SAPS provincial headquarters in Durban on Friday that three men were in custody for the bombings‚ which largely targeted Woolworths stores‚ a Verulam mosque and the Vodacom Durban July.

More arrests were imminent‚ he added.

“I’m sure that every one of you recall the incidents of incendiary devices that were placed at various places including retail stores in and around Durban‚” he told the briefing.

Cele said the three men were arrested in connection with “the placing and detonating of these devices” as well as for other crimes following a “joint multi-disciplinary intensive investigation”.

According to Cele‚ the arrests were linked to the bomb threats and the discovery of incendiary devices in July and August.

Police have arrested three men for a spate of bombings in and around Durban and the planting of an incendiary device at a mosque in Verulam‚ police ...
News
3 years ago

Several incendiary devices - rudimentary in nature - were planted at Woolworth stores and food markets. Some were triggered and caused minor fires. A number of stores were temporarily closed following anonymous bomb threats.

“In a separate incident that was linked to some of the placing of devices‚ three men were attacked in May this year at a mosque in Verulam which left one person dead and two others critically injured‚” Cele said.

He said the investigation team - comprising crime intelligence‚ the Hawks‚ forensic experts and the National Prosecuting Authority - worked tirelessly over the past four months to arrest the three across various areas of KwaZulu-Natal.

“I can confirm at this stage that some of these incidents are linked to each other and more arrests are imminent‚” he said.

Cele said the men were likely to face other charges‚ including contravention of the Explosive Act and arson.

“Up to this point the team has established extortion as the most likely motive for these incidents.”

Cele said the possibility of other motives could not be ruled out.

“Three suspects are currently in police custody and they will be brought before court early next week. At this point we would like to appeal to everyone not to release the identities of the suspects until they have appeared in court.”

The incidents prompted Woolworth to implement a search process at its Durban stores for the "safety and protection" of customers. Woolworths had also deployed additional uniformed security guards at all stores in KwaZulu-Natal.

The Hawks are investigating whether a man arrested after the failed attack on Taqwa Mosque in De Deur‚ outside Vereeniging‚ on July 31 has links to ...
News
3 years ago

A night of horse racing and revelry turned to horror for Thebe Mochochoko after he and a friend became the latest targets in a string of Durban ...
News
3 years ago

KZN Woolwoths customers to be searched after spate of bomb threats

All Woolworths customers will be searched before entering stores in KwaZulu-Natal.
News
3 years ago