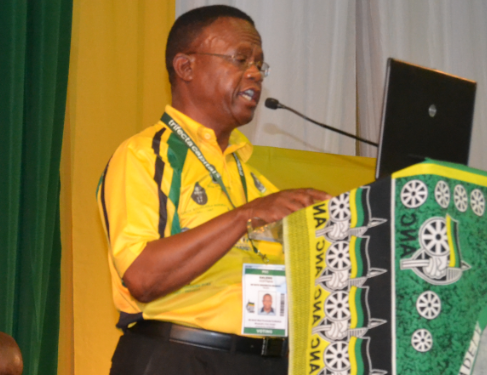 If this continues by the end of September‚ the department would have spent about R600‚000 on embattled North West social development MEC Hoffman Galeng’s private residence security‚ based on a monthly R50‚000 benchmark.
Image: Via Twitter/@MyANC_Bophirima

It was not clear why the MEC needed 24-hour security at his Vryburg house‚ especially since he was not occupying the house full-time as his official residence is 150km away in Mahikeng.

For any office bearer to get such an arrangement‚ the ministerial handbook dictates that security assessment be done and a decision taken by police and intelligence ministers on security extra security arrangement as necessitated.

When asked about full-time private security services at Galeng’s house‚ the department did not say whether a decision was taken at a higher level as required‚ nor explain what could have compelled such an arrangement.

Galeng was a member of the provincial legislature before he was appointed MEC by former Premier Supra Mahumapelo in August last year.

Departmental spokesperson Petrus Siko said Galeng has had security at his private residence on assuming his position as MEC.

R100k for a rug: Public works 'splurging' on ministers' homes

Cabinet ministers are eating at dining tables that cost more than a small car.
News
3 years ago

“The MEC assumed responsibility for the department in August 2017. Security has been provided at MEC’s private residence since September 2017‚” he said.

This means the department would have‚ by the end of September‚ spent about R600‚000 on Galeng’s private residence security‚ based on a monthly R50‚000 benchmark.

This‚ according to a former MEC and chairperson of standing committee on public accounts (Scopa)‚ Mahlakeng Mahlakeng‚ was unheard of.

He said there was “no provision in the ministerial handbook” which allows Galeng to have such extra security. The handbook was clear‚ he said‚ that where a decision for such an arrangement is taken‚ it will “include security of private residences occupied on a regular basis”.

“I only know of a once-off R100‚000 per term [payment] for security upgrades when one is appointed MEC… That amount could have gone up but I am not familiar with anything beyond the once-off amount‚” he said.

While Galeng’s department seemed to see no problem with so much spent on a house not occupied on a regular basis by the MEC‚ Gauteng Premier David Makhura has last year ordered that all MECs who spent more than R200‚000 on security upgrades at their houses to pay the difference.

Why are we spending R500‚000 on braai areas for ministers?

Why are we spending almost half a million rand on braai areas for ministers?
News
3 years ago

Meanwhile‚ TimesLIVE has seen documents proving the department was paying for security at the MEC’s house. It is explained in the same documents that FDL Enterprise Trading was appointed “to secure the MEC’s private residence” after the termination of the contract with the previous service provider.

The same company was awarded contracts to provide security services at six departmental buildings‚ but the MEC’s private residence does not appear on the list of sites where contracts were awarded.

Galeng is also accused of having a state vehicle assigned to his office in Mahikeng running his personal errands full-time.

Branch chairperson of Nehawu‚ Godfrey Mandubo‚ said their investigation has revealed that the vehicle spends much time away from Mahikeng.

“Those in charge of transport have confessed that they only see the vehicle once in two months when it comes in for service. After they never know what is going. Its trip card is also written North West which is not specific at all‚” Mandubo said.

Public Works minister Thulas Nxesi has conceded that government is spending an exorbitant amount on buying and maintaining houses of ministers‚ ...
Politics
3 years ago

The department has denied this.

“We confirm that the vehicle that has been allocated to MEC’s driver/messenger is a Polo Vivo that is mostly being used for official purposes. We would like to dispel any allegation that the said vehicle is being misused‚” Siko said.

Galeng is not new to controversy. He made news headlines in 2015 while he was still chief whip of the ANC in the provincial legislature with reports that he splurged on fast food‚ fuel and car rentals using the party’s caucus credit card.

“On average‚ Galeng spent between R25‚000 and R50‚000 a month with the card between June and November last year‚” the newspaper reported.