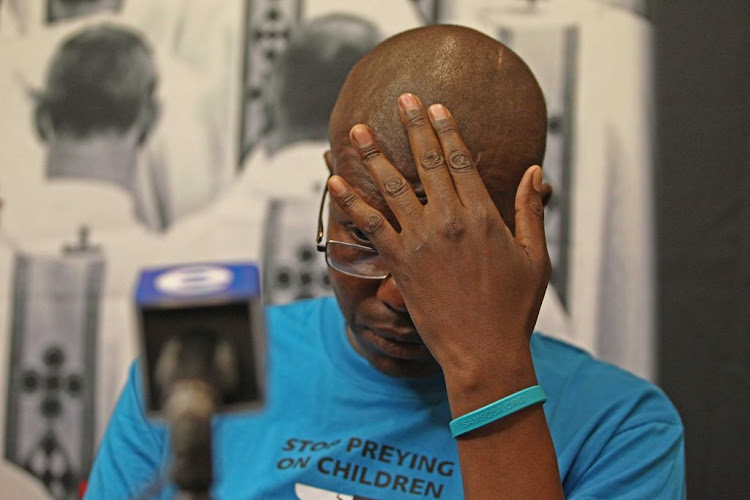 William Segodisho claims that he was allegedly molested and raped by a Catholic priest for four years in the 1980s.
Image: Thapelo Morebudi

The Catholic church in South Africa has distanced itself from explosive claims about child abuse which have been levelled against a priest.

At a media conference held in Johannesburg on Tuesday‚ Limpopo resident William Segodisho revealed how he had allegedly been abused in the 1980s by a UK priest‚ and that the church had apparently covered up the abuse when he tried to report it.

The retired Jesuit priest is currently living in a nursing home in the UK. He returned to the UK in 1990. The Jesuits are an order within the Catholic church.

The abuse‚ which is said to have happened between 1986 and 1989‚ allegedly occurred after the priest befriended Segodisho while he was living at a street shelter for children in Hillbrow‚ Johannesburg.

Segodisho fled to Johannesburg in 1986 after he was involved in violent protests against apartheid-era police in Limpopo. It was while at the shelter that the priest introduced him to the Catholic religion‚ allegedly enrolled him at private schools‚ bought him clothes and took him on holiday to Durban.

Segodisho claims that he was allegedly molested and raped as a way of "repaying him [the priest] for his kindness".

A Limpopo man has come forward to allege sexual assault and rape by a UK Catholic priest‚ and the complicity of the church in blocking his demands ...
News
3 years ago

Segodisho further added that he opened a criminal case with the Hillbrow police in February.

He said he had decided to speak out after the church repeatedly blocked his attempts over the past 17 years to get the priest reported to the police and have him extradited to South Africa to stand trial for his alleged crimes.

His fight for justice was renewed by the “Sidney Frankel Eight” case‚ where the Constitutional Court‚ in June‚ removed the statute of limitations on when cases of sexual assault prescribe as well as to have the definition of rape include men.

Under the previous sexual offences act men could not be raped.

The Constitutional Court ruled that a section of the Criminal Procedure Act‚ which imposed a 20-year limit on prosecution for sexual assault‚ was unconstitutional. Up until June‚ only rape survivors had been able to lay criminal charges after the 20-year limitation.

The abuse allegedly occurred‚ according to Segodisho‚ at Christ the King Cathedral in Doornfontein‚ the Holy Trinity Church in Braamfontein and when the priest took Segodisho on holiday to Amanzimtoti‚ near Durban.

In a statement issued on Tuesday‚ Father Thabo Motshegwa‚ chairperson of the Archdiocese of Johannesburg's Professional Conduct Committee‚ said the church took all cases of child abuse seriously.

William Segodisho speaks about his abuse at the hands of a British Catholic priest, who was based in South Africa during the 1980s and 1990s, at a media briefing in Rosebank, Johannesburg, on Tuesday October 9 2018. Subscribe to TimesLIVE here: https://www.youtube.com/user/TimesLive

"However‚ the first we heard about this case was in February. It was never formally reported to the Catholic Archdiocese of Johannesburg or any of its professional conduct committees.

"The Catholic Church‚ in its seriousness in addressing this issue‚ has special‚ dedicated local and national professional conduct committees‚ which investigate every reported case."

He said the committees liaised directly with the victims‚ police‚ schools and the National Prosecuting Authority on reported cases.

"It should be noted that‚ according to South African law‚ criminal charges have to be laid first and the legal process has to take its course before the Catholic Church can intervene."

Motshegwa said when “victims” reported the alleged abuse they were interviewed privately by trained members of the professional conduct committee and assisted with the laying of criminal charges.

"The Catholic Church has a Protection of Minors policy which includes strict guidelines to be adhered to by all Catholic institutions. This is currently being updated. It involves security checks for all staff in religious institutions from cleaners to priests.

The devil is alive and well and working overtime to undermine the Roman Catholic Church, Pope Francis says. In fact, the pope is so convinced that ...
News
3 years ago

"Priests arriving from overseas have to obtain a clearance from their diocese before they are allowed to serve as priests."

He said in this case the priest was from the Society of Jesus [the Jesuits] which‚ although falls under the Catholic church‚ operates independently.

In January in a letter written to Segodisho's lawyers‚ by Father Damian Howard - head of the British Province of the Jesuits in the UK - he states‚ in response to Segodisho's request for an apology from the priest‚ that he was in a nursing home‚ "and his general health is very poor”.

"I think‚ at the moment‚ a conversation between you and him is inadvisable as it is unlikely to be satisfactory for you ... However‚ if his health recovers‚ we can review the situation.

"It is clear that he violated the trust placed in him as a Catholic priest. He took advantage of you at an age when you cannot possibly have given your consent."

Father Russell Pollitt‚ the Johannesburg Jesuits’ spokesman‚ said the allegations were brought to the attention of the British Province of the Society of Jesus in 2001.

A church leader in Mpumalanga was remanded in custody on Thursday after he was arrested for allegedly raping a 15-year-old girl‚ who is part of his ...
News
3 years ago

“When the case was reported in 2001‚ the priest had already returned to the UK‚ following a sabbatical in South Africa. He returned to the UK in 1990. He was informed of the allegations by the British Provincial and withdrawn from all active ministry. He has never ministered in public again. No other allegations have been brought to our attention by anyone."

"A local lawyer met with Segodisho and his lawyers at the time in Johannesburg. The Diocesan authorities were verbally notified of the case. It was agreed that those responsible for him must deal with the case."

Segodisho said he would not relent in his fight for justice‚ and to ensure that other children never had to endure "what this man did to me".

"I have children of my own. I am petrified for their safety. Our yard is always locked and I never let them go anywhere on their own.

"That is because of what he did to me ... while on holiday in Durban and at Christ the King Cathedral in Doornfontein and the Holy Trinity Church in Braamfontein.

Six months after sex abuse claims rocked the Anglican Church of Southern Africa‚ it has adopted new measures to deal with the issue.
News
3 years ago

He said despite repeated attempts to get the church to take action‚ none had been taken.

Rees Mann‚ SA Male Survivors of Sexual Abuse executive director‚ said instead of helping Segodisho‚ when he first reported the priest to the South African Catholic church authorities‚ the church's officials simply transferred him back to the UK.

"Who knows what he did when he returned to the UK. Who knows how long he has been allowed to commit his crimes."

He said they were calling on the South African government to launch an inquiry into all religious organisations and allegations of sexual abuse.

"This is definitely not an isolated incident or limited to one religion."