Bins full of rubbish in Joburg due to bungled city contract 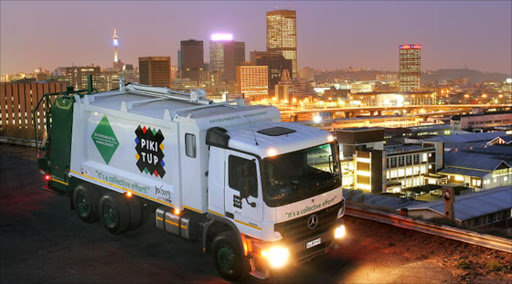 Rubbish removal was disrupted due to the bungled renewal of a contract.
Image: Times Media

The streets of Johannesburg‚ including some in the richest suburbs of the economic heart of South Africa‚ were left with bins full of rubbish for almost a week after the city failed to timeously renew a multimillion-rand contract with Avis SA‚ the vehicle-rental company in the Barloworld group.

Mayor Herman Mashaba‚ who was elected as the DA’s mayor after the 2016 local government elections‚ having run on a ticket of improving governance‚ has emphasised cleaning up the city.

This includes his monthly city-wide cleaning campaign‚ in which residents are encouraged to join in.

In recent months the city has looked worse for wear as Pikitup‚ the city’s entity which is responsible for keeping it clean‚ suffered setbacks.

The removal disruptions that occurred last week were due to the bungled renewal of a contract.

Environment and infrastructure services MMC Nico de Jager told Business Day they only realised the month-to-month contract had expired on October 1 when workers arrived to pick up the rental vehicles and were told they could not use them.

The permanent contract expired in October 2017 and has not been renewed.

De Jager said it was not Pikitup’s responsibility to renew the contract because contracts were dealt with centrally by the city’s group corporate and shared services department.

Five suspects have been arrested for the alleged attempted murder of a Pikitup general manager who was allegedly assaulted and doused with petrol by ...
News
3 years ago

Johannesburg mayor Herman Mashaba says interruptions to the city’s refuse removal services over the past two weeks have been “politically motivated”.
News
3 years ago

Garbage collection problems are set to continue in parts of Johannesburg after protesters on Thursday set a depot alight.
News
3 years ago