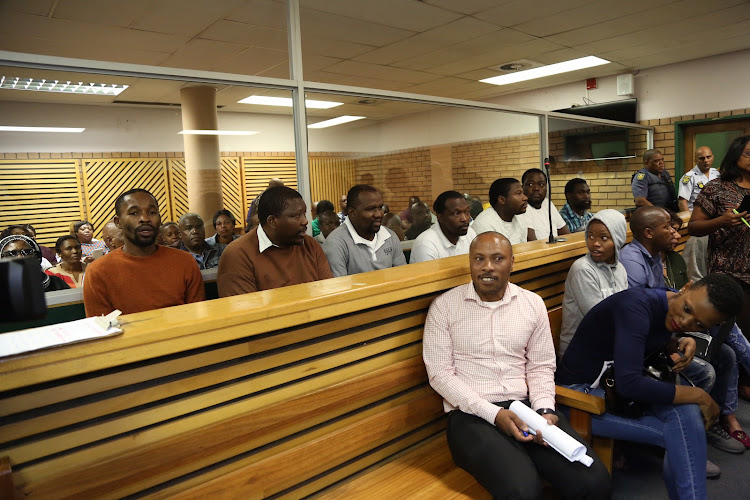 A Pietermaritzburg ANC councillor who is among the six men accused of the murder of former fellow ANC councillor Musawenkosi “Maqatha” Mchunu earlier this year has claimed that he has been targeted for supporting former ANC provincial secretary Super Zuma to be re-elected to his position.

Nkosinathi Gambu‚ a Ward 10 ANC councillor in KwaPata in Pietermaritzburg who is accused number one in the case‚ told TimesLIVE before the start of their bail application in the Pietermaritzburg Magistrate’s Court on Monday that he was targeted by those who supported President Cyril Ramaphosa ahead of the ANC’s elective conference.

“I’m sure that as Ward 10 councillor in KwaPata and Azalea under Umsunduzi Municipality where the ANC won‚ my only case is that I once stood and said I support Super Zuma to become provincial secretary.

“If you look at the ANC politics in the province‚ it is now saying that people who are arrested as suspects must not be supported because few individuals want to pursue their own direction.

A heavy police presence in the PMB Regional court for the 6 accused of the killing of ANC Councillor Thamsanqa Mchunu who was gunned down outside his home in KwaPata in Pietermaritzburg @TimesLIVE pic.twitter.com/YQ0GghNRl1

“So it means that my sin was to support Super Zuma and that is not only the case. At Nasrec I supported Nkosazana Dlamini-Zuma. So those who supported CR17 think that we must be subjected to injustice of the law. They act beyond the arm of the law. The law in South Africa says you are innocent until proven guilty‚” he said.

Zuma lost the ANC provincial secretary position to the incumbent‚ Mdumiseni Ntuli‚ at the party’s provincial conference in July.

Gambu also lashed out at South Africa’s criminal justice system for delaying their case‚ saying the police did not have tangible evidence against them.

“When the police take us to court they must have tangible evidence. But up until now the police do not have evidence and we are victims and treated like we are not South Africans. The court is delaying and the state is supposed to be prosecuting us but they say they are not ready. We moved from one court to another. How do our families feel about this? It means there is no justice in South Africa‚” said Gambu.

“Listen‚ who do you think you are? It seems like you will suffer the same fate as Sithole. You are not a piece of meat that cannot be swallowed‚ if ...
News
3 years ago

The others in the dock for Mchunu’s murder are Gift Zungu‚ the son of Umngungundlovu district municipality deputy mayor Thandiwe Zungu‚ Skhanyiso Zimu‚ Sifiso Mbhele‚ Mlungisi Zimu and Ayanda Ngubane who are all members of the ANC’s Ward 10 committee. They were arrested last month and were appearing in court for the third time.

Mchunu was gunned down at his driveway in KwaPata in May. He had led several marches demanding that the Moses Mabhida regional conference be postponed‚ that the ANC regional executive committee be disbanded and that corruption in the municipalities under the uMgungundlovu District be investigated.

Mchunu’s murder was of a series of politically-motivated killings in the province which prompted Ramaphosa to assemble his security cluster ministers‚ including the National Prosecuting Authority and national police commissioner Khehla Sitole‚ to deal with the killings.

The six men appeared relaxed in court and chatted with their relatives and supporters - who had packed the public gallery - through the glass separating them.

Before their bail application resumed amid tight security inside and outside the court‚ Gambu shouted from the dock that he was the one who had allowed the media access to the court case because “it’s promotion of access to information”.

“We can’t have an open court and then have a closed session‚” he said.

Both the state and defence attorneys agreed that the bail application be adjourned‚ to be heard over four days from October 23 until 26.

The suspects were remanded in custody.