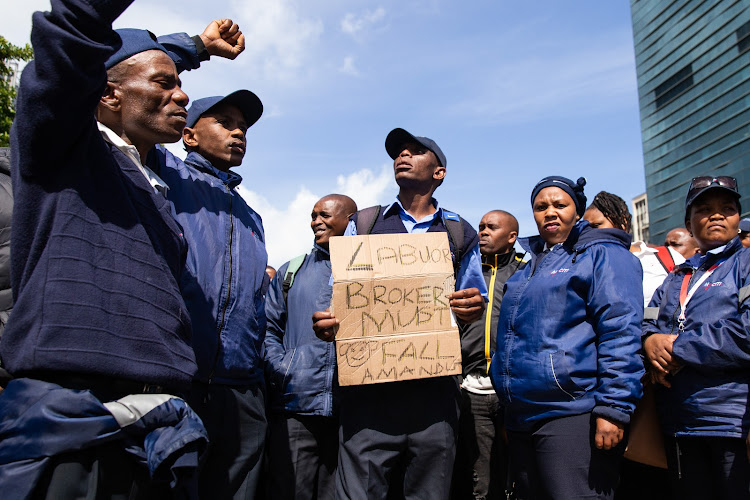 On Monday about 300 employees operating MyCiTi busses gathered outside the Cape Town Civic Centre for an unprotected‚ indefinite strike. Most MyCiTi routes were affected.

The drivers‚ cleaners and marshals‚ who work for the MyCiTi vehicle operating companies (VOCs)‚ are demanding higher wages and better working conditions.

Some employees were unaware of the strike and only found out when they reported for duty. A driver GroundUp spoke to at a bus stop on Adderley Street said he was working and not sure why other drivers were striking.

Partick Mabindisa‚ employed by Table Bay Rapid Transit (TBRT) and a spokesperson for the strikers‚ said they have issues that go back to 2013. He said Mayoral Committee Member for Transport Councillor Brett Herron called them wildcats during the April strike instead of addressing their problems.

“We are subjected to unfair labour practices within this MyCiTi structure. Under these labour brokers we wear a beautiful MyCiTi uniform but we are discriminated against. We earn half the amount of the R16‚000 paid to other drivers directly employed by MyCiTi or Golden Arrow. We eat in the toilets because we don’t have canteens … A canteen is only here at Civic Centre. Cashiers‚ cleaners and marshals are lowly paid.”

“We are fed up of NUMSA [the union for the workers]. They are aware of these things. They never take us seriously. Most of the workers are working 14 hours a day but they are not paid for overtime work. These people have children; they only go back home at 11pm‚ and who is looking after their children?” he asked.

NUMSA national office referred queries to Cape Town’s office‚ but the spokesperson did not answer the phone.

Another striking driver‚ also employed by TBRT‚ said he earned R8‚000 before deductions. He lives in Makhaza‚ Khayelitsha. He has 13 dependents and he is not coping. Drivers who had started work at the same time as him but were employed directly by MyCiTi made far more money‚ he said.

Toyota workers down tools in Durban

Members of the National Union of Metalworkers of South Africa (Numsa)‚ who are employed by Toyota South Africa‚ have downed tools and embarked on a ...
News
3 years ago

TBRT is a subsidiary of Golden Arrow that operates the Atlantis and some inner-city routes.

Hertzog Boulevard was closed to incoming traffic when striking drivers gathered on the red bus lane outside the Civic Centre station.

Herron said‚ “The drivers are represented by trade unions and their conditions of employment are the subject of a collective bargaining agreement. An agreement was reached as recently as May this year‚ following a protracted four week strike. This morning’s wildcat strike is inexplicable. I urge those who have embarked on this strike to use the structures and processes in place to address any grievances or concerns they may have with their employment.”