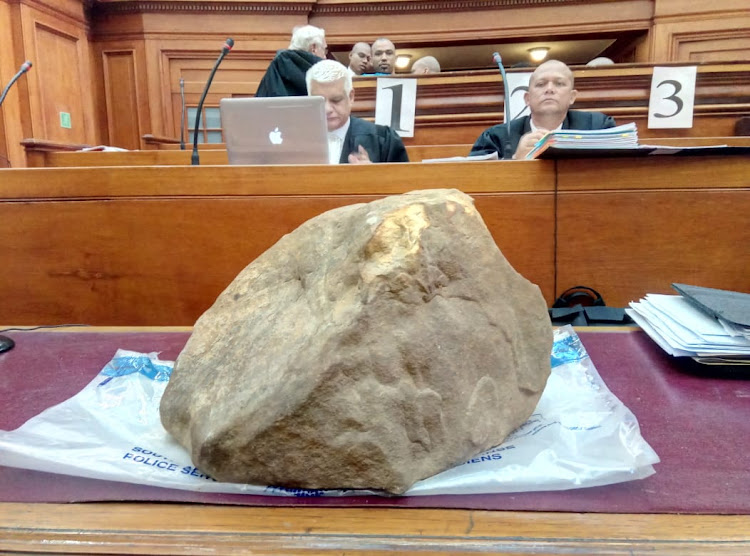 The rock used to kill Hannah Cornelius, displayed in the high court in Cape Town during the murder trial of four defendants on October 16 2018
Image: Aron Hyman

When Conrad Booysen and Flippie Matthee placed a massive rock over a borehole‚ they were unintentionally setting down the weapon which would be used to end Hannah Cornelius’s life.

The two men testified on Tuesday in the high court in Cape Town how they went to fix a borehole pump on Groenhoek farm near Stellenbosch on the afternoon of Friday‚ May 26‚ 2017.

After they removed a pump in need of repair from deep beneath the earth‚ they placed a rock over the hole. The rock was so large that the 54-year-old Booysen could not pick it up. His younger colleague Matthee‚ 32‚ said he manhandled the “hefty” rock into place.

“Sometimes the farm kids will throw rubbish down the hole‚” said Matthee.

As the two workers left for home before 5pm‚ Stellenbosch University students Cornelius and Cheslin Marsh were hours away from meeting each other for the last time.

Mom's comfort for Hannah Cornelius's friend as he relives nightmare

On Thursday, Marilyn Marsh did what mothers do.
News
2 years ago

At about 6:30am the next day‚ Cornelius was lying by the borehole with her face in the ground. Her heart was pumping blood through two neck wounds‚ possibly from the swift penetrating thrust of a screwdriver‚ but this was not what killed her.

According to Dr Deirdre Abrahams‚ the forensic pathologist who conducted the autopsy on Cornelius’s body‚ the fatal blows came when her murderers twice dropped the rock covering the borehole on the back of her head.

“The blunt force injuries to her head were very rapidly fatal‚” said Abrahams.

When Matthee and Booysen arrived at 8:20am‚ the area they had been working in the previous day was a mess.

“I saw something that looked like a white bag. Then I saw it was a person‚” said Booysen.

They left to find the foreman‚ who thought it was a doll lying on the ground. But they soon realised it was a young woman.

Cornelius’s jeans were pulled halfway down. There were bruises on her knees and legs‚ and bruising on her arms from the strong grip of the men who had killed her.

Tears as Hannah’s friend faces her 'killers' in court

On the one side of the courtroom sat Cheslin Marsh, gasping for air as he battled to fight off fits of sobbing.
News
2 years ago

Vernon Witbooi‚ Geraldo Parsons‚ and Eben van Niekerk listened intently as witnesses testified on Tuesday‚ trying to find out whether the versions of events matched up to Witbooi’s confession of what transpired on the night of the murder.

He claimed last week that he was part of the group of men who abducted Cornelius and Marsh but that he sat in the car when Parsons‚ Van Niekerk and an alleged third suspect raped and killed Cornelius and attempted to kill Marsh.

On Sunday May 28‚ the crime scene was further explored by Ethan‚ a Labrador trained to detect bodily fluids‚ and handler Sergeant Jerome Timmy.

Timmy told the court that Ethan helped him to detect body fluids around the murder scene. They also found used condoms and condom wrappers.

Cheslin Marsh laid his head on a rock and prayed as two of the men alleged to have murdered Hannah Cornelius stood above him with half-bricks in ...
News
2 years ago

Hannah Cornelius's last hours... by one of the men accused of killing her

The craving for a cigarette allegedly led Vernon Witbooi and three other men on a murderous path that ended with the death of 20-year-old Hannah ...
News
2 years ago
Next Article