Cost of torched trains at Germiston is R6.5m 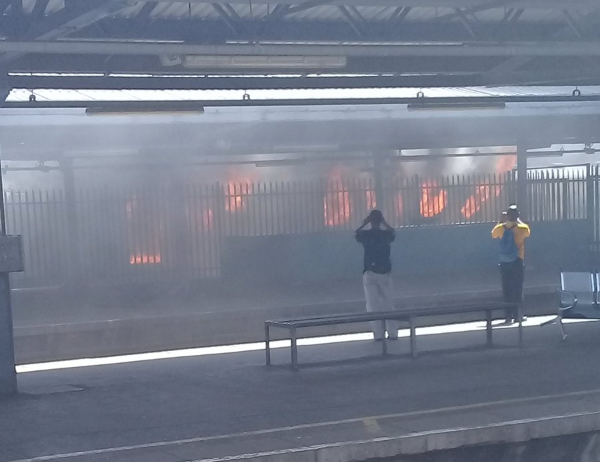 The cost of the damage caused after two Metrorail trains were torched while stationary at Germiston Station on Tuesday is R6.5-million‚ Communications Minister Nomvula Mokonyane disclosed on Wednesday.

She said she was outraged by the arson‚ describing it as an act of economic sabotage.

"Government will no longer tolerate the destruction of property and infrastructure; and calls on law enforcement agencies to arrest the perpetrators responsible for this crime and ensure that they face the might of the law."

The loss of the trains has affected about 5‚000 commuters‚ said Mokonyane.

Furthermore‚ she said‚ it has "a significant impact on the business sector which in turn affects the economy; infrastructure expenditure‚ and the timely operation of services."

"It is unfortunate that this incident took place at a time when authorities are working to turn around the commuter rail system. Trains are critical infrastructure and key assets of our country and transforming rail infrastructure will have a direct impact on the country's key industries. Rail transport have over the years unlocked economic‚ social‚ and cultural doors and have connected South Africans from various parts of the country."

Two train sets were burning fiercely at the Germiston railway station on Tuesday‚ resulting in the suspension of services on the East Rand.
News
2 years ago

The City of Cape Town’s mayoral committee member for transport‚ Brett Herron‚ has described the compromise reached between the Rail Safety Regulator ...
News
2 years ago

DA politicians gave a simultaneous cry of despair on Tuesday after two more trains were torched in Cape Town.
News
2 years ago