WATCH | Shops torched in backlash over drug dealers in Hillbrow 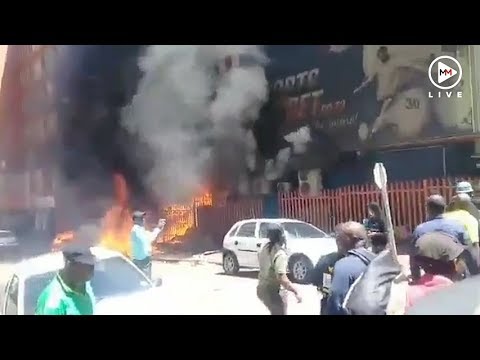 “Let it burn. There are drugs inside.”

These were the words of encouragement shouted after a large crowd of people set fire to several shops in Hillbrow‚ Johannesburg.

Police spokesperson captain Mavela Masondo said the shops were burnt shortly after a community meeting on Sunday. “We don’t know what was discussed in the meeting‚ but some of the community members went to set alight several shops which they alleged are run by criminals‚” Masondo said.

He said several shops and cars were damaged in the fire. “The police have opened a case of arson and malicious damage to property. No one was arrested.”

A Hillbrow resident who did not want to be named said some members of the public who torched the shops were wearing ANC regalia.

“I live next to the building that was burnt. The people who torched the building were marching in the street. They were chasing Nigerians away. They say they sell drugs.”

In a video shared on social media‚ the building could be seen burning fiercely at ground level as onlookers recorded the destruction on their cellphones.