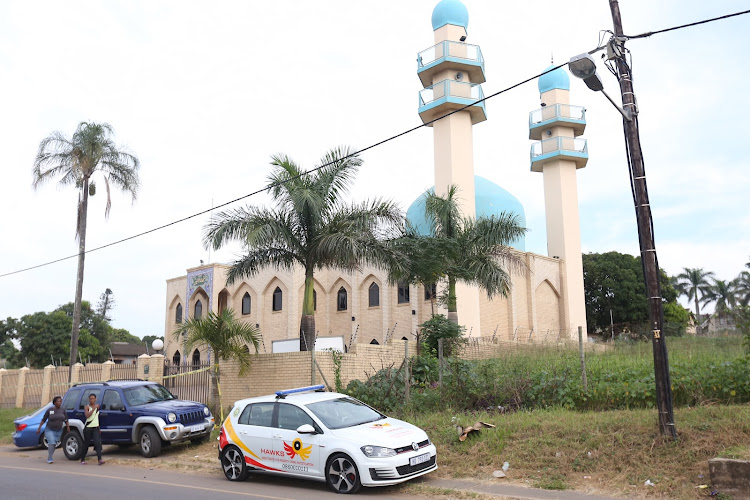 The Hawks outside the Mosque in Verulam that was the scene of a brutal attack that occurred on May 10, 2018.
Image: Jackie Clausen

A dead woman’s cellphone - and the pulsing electronic trail it left behind - became the lone strand of evidence which linked her businessman husband to the bloody Verulam mosque attack‚ a dramatic dungeon kidnapping and a spate of fire-bombings across Durban.

Farhad Hoomer‚ in his bid for bail‚ revealed details of the clandestine police operation that led to his arrest – along with eighteen others – in a series of anti-terror raids two weeks ago.

Charges against seven of the nineteen men have been withdrawn‚ with specialist state prosecutors still in dogged pursuit of DNA samples which may link them to the string of urban terror attacks.

In an affidavit submitted to Magistrate Irfaan Khalil on Monday‚ the 41-year-old Overport‚ Durban‚ man provided as yet unseen background to the secretive saga playing out before the Verulam Magistrate’s Court.

Police had‚ Hoomer said‚ honed in on a cellphone that belonged to his wife Nadia‚ who died in April.

One of the men with alleged links to a spate of terror bombings and a fatal attack on a Verulam mosque in May - 37-year-old Goolam Haffejee - has ...
News
3 years ago

The phone’s movement‚ tracked to the Palmview cell tower near the Imam Hussain Mosque in Verulam‚ had ultimately led police to him.

“The highest he [a police investigator] can put it is to say that the tower is one in the area where the Verulam mosque is situated‚” Hoomer said‚ adding that cell phones registered to his co-accused Goolam Haffejee and Ahmed Haffejee showed a similar pattern of movement.

“Colonel Vreugdenburg [a member of the investigation team] expresses his suspicion that I‚ together with Goolam Haffejee and Ahmed Haffejee‚ was involved in the attack at the mosque because of the movement of our cell phones‚” Hoomer’s affidavit reads.

It was also at a Reservoir Hills property‚ which he owns‚ where Hawks operatives found a Tanzanian man chained in what they described as a dungeon‚ seemingly held for several weeks to extort a ransom from his family.

The man‚ abducted near his Umbilo home‚ had been chained and subjected to repeated beatings‚ forced to survive on a single banana per day. He was rescued and rushed to hospital.

Traces of DNA on bombs planted across Durban and carefully gathered by forensic detectives may become crucial evidence against a now thwarted terror ...
News
3 years ago

“In relation to the kidnapping charge‚ I understand the victim was held at 8 Nugget Road. Although I admit that I do own this property‚ I was not residing at that address [and] various other persons were staying there.”

He held that he lives with his family in Overport.

Hoomer‚ who through a series of businesses has a turnover of R5-million per month‚ maintained that the state’s case against his and his co-accused was “flimsy” – and‚ as such‚ provided a solid base for his application for bail.

He said that while he was singled out by the kidnapping victim at an identification parade‚ this was immaterial as there were “serious irregularities” which would form the basis of a legal challenge later at trial.

His affidavit further revealed that he had had dealings with three Durban businesses in which incendiary devices were planted for the purpose of extortion.

Bomb-makers and their masters still veiled in secrecy

The alleged bomb-makers and their masters - the hidden hands behind a spate of attacks in Durban and its surrounds - continue to appear in court ...
News
3 years ago

He adds that investigators were unable to link him to any of the bomb attacks at Woolworths stores‚ with CCTV footage revealing that men of African descent had planted the devices.

“It follows that there is no evidence against me on these charges‚” Hoomer fruther argued.

Goolam Haffejee‚ alleged to have colluded with his cousin and co-accused Ahmed Haffejee‚ as well as Hoomer‚ has already been released on R100‚000 bail.

The case is expected to continue on Tuesday.

The court appearance of 19 people with alleged links to the Verulam mosque attack and a spate of arson attacks in recent months took place behind ...
News
3 years ago

Police have thrown down a bulwark around the Verulam Magistrate’s court as part of a stringent security sweep ahead of the appearance of 19 men ...
News
3 years ago

Five months to the day after Verulam mechanic Abbas Essop was killed by knife-wielding men at the Imam Hussain Mosque‚ an auditorium has been renamed ...
News
3 years ago