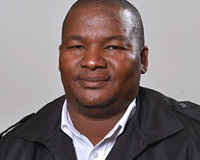 On Monday‚ community members and ANC leaders gathered in Bloekombos at the home of slain ward 101 councillor Luyanda Mbele. Mbele and his cousin‚ Mzwandile Mathenjwa‚ were shot dead on Sunday night.

Joyce Mbele‚ the councillor’s mother‚ cried‚ “Why did they kill my child?”

She said‚ “Last year he told me that there were people who wanted to kill him.”

Xolani Sotashe‚ Chair of ANC Dullah Omar Region‚ said‚ “We received information that he was killed by ruthless people who drove a car with a falsified number plate‚ so it is a well-planned hit.”

“Law enforcement agencies must do their job and get to the bottom of the murder. ANC branch members must put their ears to the ground and find out who assassinated Luyanda‚” said Sotashe.

Wallacedene ward 6 councillor Simphiwe Nonkeyizana (ANC) says he now lives in dread of being assassinated. “I am now scared of being killed because I walk and drive around the township alone. I have no bodyguards.”

Kraaifontein police station commander Brigadier Gerda van Niekerk said‚ “I would always contact him when there was a missing child and he would always assist me in mobilising the community against crime… He was so important‚” she said. “I’m still dumbstruck. It has not yet sunk in.”

She said a team of detectives had been assigned to investigate the murder. “We’ve got experts who are dealing with the evidence found at the murder scene… We won’t sleep until we find the killer.”

The African National Congress in the Western Cape has condemned the killing of Bloekombos ward councillor Luyanda Mbele and are calling for the swift ...
News
3 years ago

Mbele’s cousin‚ Phumla Mvandaba‚ said the murders occurred at 9pm on Sunday at her home in Ndeleni Street‚ Kraaifontein‚ Wallacedene. “He stepped out to turn down the volume of his car radio‚ and I followed him‚” she said. Mbele had parked his car beside her neighbours’ cars. “I saw a man cock a gun‚ put it to his forehead and fire about three shots.”

She said another cousin‚ Mzwandile Mathenjwa‚ “tried to grab the gun from the man and they wrestled before they both fell down”. The killer overpowered him and shot him several times.

Mvandaba said‚ “I fear that the killer may go after me now. I doubt if I will continue to stay at my place. I’m scared.”

Mbele is survived by his mother‚ Joyce; his four daughters‚ two sons and two grandchildren.

Community leader Eddie Ntyintyana said Mbele had introduced a gardening project last year. “He set aside money to introduce a boxing team as a means to combat gangsterism at schools‚” he said.

Metrorail regional manager Richard Walker condemned Mbele’s murder as “senseless”. “We acknowledge and appreciated Luyanda as a passionate and dedicated advocate for commuters’ rights who worked tirelessly to improve commuting conditions on trains and stations in the province‚” he said.

Walker said: “We trust that his killers will be swiftly brought to justice for robbing his family‚ community and Prasa so needlessly of a valued son‚ father‚ grandfather and colleague.”

A Pietermaritzburg ANC councillor who is among the six men accused of the murder of former fellow ANC councillor Musawenkosi “Maqatha” Mchunu earlier ...
News
3 years ago

Four more people‚ including a Knysna ward councillor‚ have been arrested for the murder of ANC councillor Victor Molosi in the Garden Route town in ...
News
3 years ago