'I admit it all': Weeping Hannah murder accused confesses after graphic testimony 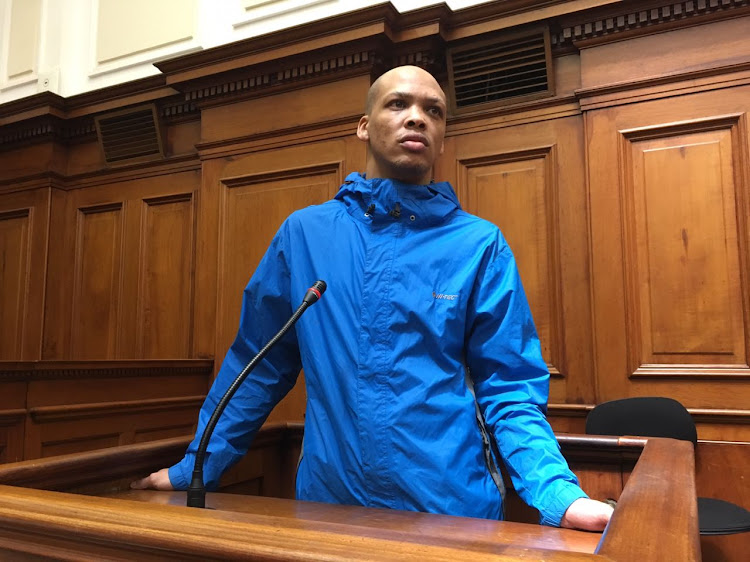 Geraldo Parsons‚ who is accused of abducting‚ raping and murdering Hannah Cornelius‚ gives evidence in the high court in Cape Town on October 23 2018.
Image: Anthony Molyneaux

Chilling testimony from one of the men accused of murdering Hannah Cornelius ended with him admitting he is guilty of all 10 charges against him.

Geraldo Parsons and his three co-accused pleaded not guilty‚ but after weeping in the witness box at the high court in Cape Town on Wednesday‚ Parsons changed his story.

Cornelius‚ 21‚ and her Stellenbosch University friend‚ Cheslin Marsh‚ were abducted on May 27 2017. Within hours‚ Cornelius was lying dead at the edge of a vineyard and Marsh had been beaten and left for dead in Kraaifontein.

Parsons began his testimony by describing the events leading up to the robbery and abduction of Cornelius and Marsh at 3.30am outside Marsh’s university residence.

“It was Friday and I came back from work at around 7pm. I got R100 from my girlfriend and showered‚” he said. “I walked to Hoek Street and I met Eben van Niekerk in Cloetesville. I smoked with Eben‚ then Eben and I walked to the ATM. While we were walking to the ATM‚ Vernon Witbooi arrived.

“Vernon‚ Eben and I said we would wait till midnight for my money to be available at the ATM. Vernon said they must go to town to Lavanda flats. We met Nashville Julius on the way. I had never met Nashville before. Vernon asked Nashville if he was joining the group. Vernon knew him‚ not me.

“Now it’s four of us walking to town to the flats. We saw police vans ahead of us so we decided to walk a different path. Then we saw this blue and white Citi Golf parked. I wasn’t sure if there were people inside but the lights were on. I said we should look inside‚ let’s take the car.

“We walked past the car. Vernon said there was a woman and a man inside and he said we should rob them. So we approached them from the back. We both approached the passenger side. I had a knife with me and I gave it to Vernon.

“We attacked the man on the passenger side. We said‚ ‘money‚ phone‚ now’ to the man. Then I leaned over the driver’s seat and opened the driver's door. I climbed out and went to the driver’s side. Then I saw Eben and Nashville were with us.

“My intention was to steal the car after robbing them. I wanted to let them go after we stole the car. I asked Hannah where the keys were‚ she said she didn’t know. I found the keys. I started the car. Nashville had left‚ I don’t know where he went.

“We started driving towards Helshoogte Pass. We stopped there and we were going to drop them there after robbing them.

A few days after he was arrested and accused of the robbery, rape and murder of Hannah Cornelius, Eben van Niekerk wrote a letter to her parents ...
News
3 years ago

“We found Cheslin’s ATM cards. Vernon asked for his pin. Cheslin gave him the pin but said there was no money in the account. Vernon didn’t believe him so he pushed him into the boot. Hannah was now in the front seat. We went to Jamestown but couldn’t find tik. We bought mandrax.

“We drove towards Kraaifontein‚ Cheslin in the boot and Hannah in front. We came to a house where we normally smoked in Kraaifontein. We stopped and went into the house. Found [the drug dealer] and asked if he has a pipe. He gave us a pipe. The man was a Xhosa man‚ I don’t know his name.

“We were going to tie Cheslin up and leave him until sunrise. I took him out of the boot. Vernon came out and Eben watched Hannah. They took Cheslin out and away from the car. Vernon said Cheslin must lie on his stomach. Vernon had two bricks in his hand. He said to me‚ 'we must kill this guy'.

“I thought he was joking. I just wanted to steal the car. Vernon threw the brick at Cheslin’s head. I stood back and I saw what happened. I couldn’t find a rock. Vernon finished and we climbed back in the car. I drove out of the area.

The top of a cold drink bottle could spill crucial evidence in the murder trial of Stellenbosch student Hannah Cornelius.
News
3 years ago

“We continued driving. Vernon was on the back seat with Hannah. While I was driving‚ Vernon gave me a condom‚ I don’t know where he got it from. Vernon said Hannah said we can have sex with her but then we must leave her after that. I saw it in her eyes that she was terrified. She said we can have sex but I saw she didn’t want to.

“We went to Bottelary Road paintball range. We smoked a pipe and asked who would be first. I said I would be first. I had sex with her but it didn’t feel right because I have a girlfriend with children‚ but I did it. [Weeps]

“I decided I’m going to take Hannah out the boot and leave her there so we can take the car. She didn’t want to climb out of the boot. She was holding on to the car. She started panicking. Eben came up and stabbed her. I let her go as the blood started to spill.

“Then I saw Vernon arrive with a rock. Vernon tripped Hannah as she was standing. And she fell. I told Vernon‚ ‘don’t kill her‚ we’ve already killed Cheslin‚ let’s leave her’. But Vernon threw the rock on Hannah’s head.

“Then we got back in car and we drove. I asked if she was dead and Vernon said yes she is dead. We drove off to Kraaifontein again. On our way‚ we wanted to go to the same hokkie where we were earlier. We asked where we could buy tik. The man named Kaffertjie climbed in with us.

“We smoked and we had no more money. I told Vernon I wanted to sell the car. I was focused on possible police presence. Vernon said he saw a woman. I stopped under a tree and Vernon and Kaffertjie stalked the woman. They robbed her and got back in car. Eben was sleeping at that point.

“We started driving to Kuils River. We saw another woman on the road. We also robbed her. Vernon told her she should climb in the car and asked for her pin. We went to Brackenfell petrol station to draw money. Eben‚ Kaffertjie and I were sitting in car with the woman.

“Vernon was taking a long time. I got out to check on him. We drew R1‚000 and told Eben and Kaffertjie that they only got R500. But the phone pinged with a message saying they drew R1‚000.

“We dropped the woman off because the pin was correct. We didn’t need her. We drove to two other ATMs at petrol stations and continued to draw money from her account. We gave Kaffertjie R300 and a phone and dropped him off where we picked him up.

“We drove back to Stellenbosch and Eben said he was tired and wanted to go home. Vernon gave him money and dropped him off. I had nothing on me‚ I had no money. Vernon worked with the money. We started driving to Delft to sell the car.

“I noticed there was a car following us. I told Vernon‚ ‘the police are behind us. What should we do?’ Vernon said we are now going to drive. The police van put its lights on. I sped away. The van couldn’t keep up but another car was behind us. The Golf was too slow for the other car.

“I jumped out and ran. They caught Vernon. I tried to hide and lay on the ground but the farm workers told police where I was and the police came to arrest me.”