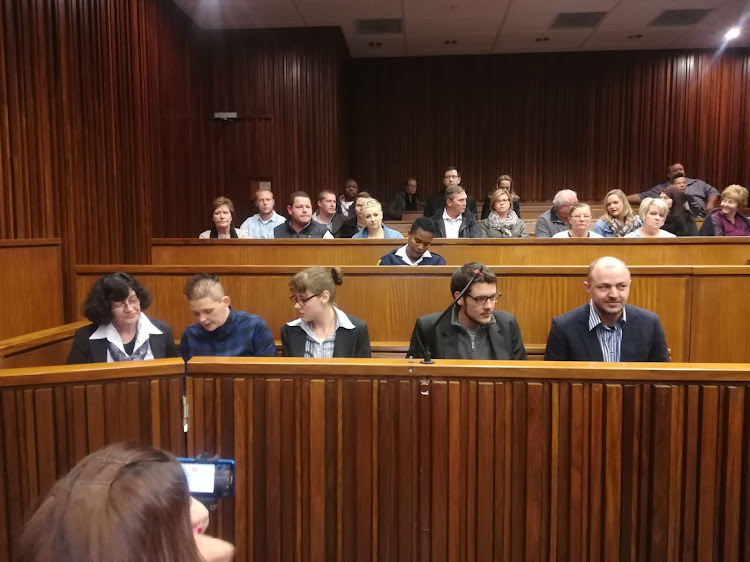 The group of people accused of going on a killing spree in Krugersdorp between 2012 and 2016 appear in the South Gauteng High Court on May 16 2018.
Image: Nomahlubi Jordaan

Zak Valentine was concerned about the whereabouts of his cats and whether he would still be able to sell his house after discovering the bloodied body of his wife in a bedroom‚ the South Gauteng High Court heard on Thursday.

Valentine and his co-accused‚ Cecilia Steyn‚ 37‚ and Marcel Steyn‚ 20‚ are accused of murdering 11 people between 2012 and 2016. Added to that are charges of robbery‚ aggravated assault‚ racketeering‚ possession of an unlicensed firearm‚ fraud and identity theft.

They pleaded not guilty to 32 counts‚ including murder‚ robbery with aggravating circumstances‚ fraud and intimidation.

Estelle Schutte‚ a principal estate agent‚ told the court on Thursday that she and a colleague had made an appointment with Valentine to do a valuation of his house on October 4 2012.

"He was not there when we got to the complex. We called him and he said he would be there in ten minutes."

When Valentine arrived‚ Schutte said they followed him into the house. "He opened the garage and we followed him. He had keys in his hands. As we walked in‚ he called out for his wife and said‚ 'Liefie‚ liefie'."

Schutte said Valentine then walked into his bedroom while they waited in the lounge.

Years after her daughter's throat was slit in a gruesome murder‚ a grieving mother told the Krugersdorp murder trial on Wednesday that she can't ...
News
3 years ago

When hairstylist Sanmarie Volbrecht was introduced to Cecilia Steyn‚ one of the three people now implicated in a series of killings that occurred in ...
News
3 years ago

Despite finding their vehicles doused in petrol during a mid-week gathering‚ members of the Overcomers Through Christ church in Krugersdorp were ...
News
3 years ago

"We rushed into the bedroom. It was dark. The curtains were drawn. I asked him to open the curtains. I could see the body of a woman."

Schutte said his wife Mikeila had been "neatly tucked in" to bed like a child. She had stab wounds and there was a lot of blood‚ said Schutte.

"We went back to the lounge. He [Valentine] said I should go back to check if she was really dead."

Schutte asked Valentine to phone someone and tell them what had happened. "I asked him if there was no one he could call. He said he was going to call his dad. He called his dad and made a sound as if he was crying.

"He kept on asking me if we would still be able to sell the property. I told him that we had cancelled the appointment with the client."

"He did not show any concern about her death‚" Schutte said. She found it strange that he was calm after losing his wife.

"He was so calm. We were shaking."

The trial continues on Friday.

“We were excited to be parents. He lost the opportunity to share everything together.”
News
3 years ago

Cecilia Steyn was a leader of a cult church and had a collection of knives‚ the South Gauteng High Court heard in testimony from witnesses on Tuesday.
News
3 years ago

Krugersdorp murders: 'There was darkness over my child' - Mikeila's mom

Mikeila Valentine‚ the late wife of one of the people accused of the Krugersdorp murders‚ left the Rhema Bible College when she joined Overcomers ...
News
3 years ago