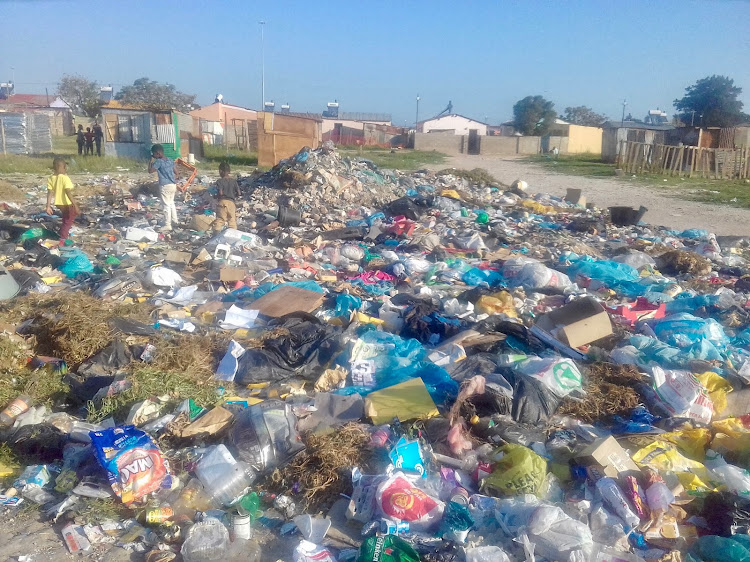 Nelson Mandela Bay Municipality in the Eastern Cape is struggling to clear dumping sites. Residents say they have no option but to dump rubbish in the open spaces as the public collection centres are overflowing. They say rubbish has been pilling up for more than three months.

This week Ward 38 councillor Edward Harker (DA) embarked on a cleaning operation in Jacksonville‚ using his bakkie to ferry rubbish to the municipal dump. “Rubbish is found everywhere; in the main roads and between houses … The municipal workers came to collect the rubbish last week but they just clear a few streets and disappear‚” said Harker.

Nomusi Makazi of Ward 56 in Motherwell‚ referring to a dumping site in Mkombe Street‚ said the refuse collection department cleared one area and skipped other places and took a long time to come back.”

A resident who did not want his name mentioned said‚ “Many people have now resorted to dumping close to the councillor’s gate. We hope this will take the message straight to the municipality. We are fed up with this situation.”

Bins full of rubbish in Joburg due to bungled city contract

The streets of Johannesburg‚ including some in the richest suburbs of the economic heart of South Africa‚ were left with bins full of rubbish for ...
News
3 years ago

Rubbish is also piling up in Powerline informal settlement in Motherwell.

Mavis Nhlapo said‚ “Our children have no playing grounds and end up playing at the rubbish hills. The places are dangerous and pose a health risk … The situation is out of control. There is a municipal front loader that often pushes the rubbish into one heap. It just leaves it like that. There used to be trucks that would carry the rubbish away‚ but they are no longer coming. At times we burn the rubbish at night.”

Marx Qandana‚ a ward committee member‚ blamed residents. “Residents are illegally dumping their rubbish in open spaces. The municipality is collecting the rubbish but residents keep dumping in this area … Some residents even swear at us when we restrain them from dumping.”

GroundUp went to the offices of ward 58 councillor Mendiswa Makunga (ANC) whose assistant phoned the councillor in our presence explaining it was a service delivery question. The councillor forbade the assistant to give GroundUp her number.

Pikitup‚ the waste management entity of the City of Johannesburg‚ said on Friday it had significantly reduced the waste removal backlog that ...
News
3 years ago

When Mniki was asked on 26 September about mounds of rubbish that had pilled up for months on the corner of Maphikela and Maxabashawa Streets in NU10 and in Powerline Informal settlement‚ he said the illegal dumping sites would be cleared by the Addo Road depot in the week of 2 October.

But a resident in Maphikela street said‚ “The front loader only came to push the rubbish away from the road and put it close to the back of houses.” Nothing had been collected to date.