Transgender discrimination is worse if you are poor 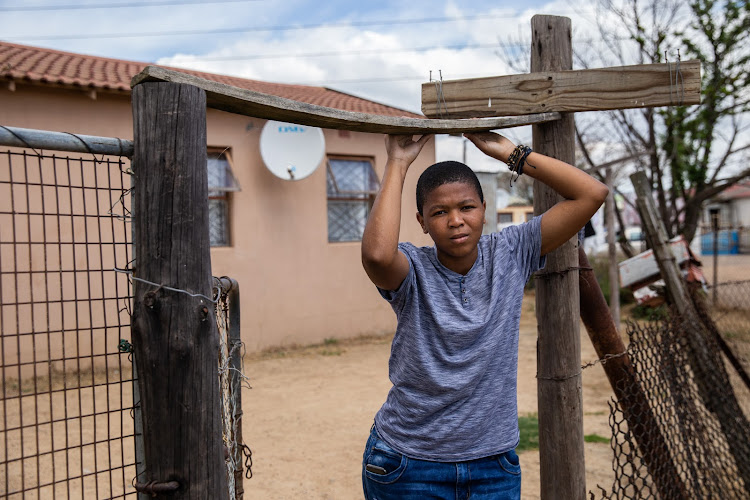 When Linda Zakiyya Chamane finally made it to the police station late at night‚ her white jacket dirty and torn‚ bruises covering her body‚ she was greeted with laughter by the police.

She left the station without reporting that she had just been gang raped. She was 17 years old.

“I remember hearing someone say‚ ‘but isn’t this what you wanted‚ because you want to be a woman?’” Chamane told GroundUp.

Chamane‚ a transwoman (a person who identifies as female but has a male body)‚ had been walking home at night when three men accosted her under a bridge in Edendale‚ KwaZulu-Natal. The men dragged her into the bush and raped her. When they saw people approaching‚ the men told her to walk away. They said if she drew any attention‚ they would stab her. She took a few steps‚ then sprinted.

Chamane‚ now 28‚ is a health advocacy officer at Gender DynamiX. She left Edendale last March for Cape Town - to escape discrimination‚ she said.

As a teenager‚ she was beaten by her father for being too feminine. “The last time he beat me up‚ I told him I don’t want to live anymore and I just want to die… I tried committing suicide many times. He beat me up; he strangled me.

South Africa’s first Workplace Equality Index (SAWEI) has identified some of the leading companies in the country for LGBTI+ employees.
News
2 years ago

“I think I heard a voice and that voice told me that I still have a lot to live for‚” she said.

At the time‚ Chamane lived with her grandmother‚ for whom she cared until her gran died in 2015. The church refused to allow her to be part of the funeral programme.

“I had to ask the priest to give me 10 seconds to say goodbye to my grandmother. I was wearing a dress that day and looking feminine‚ and he was like‚ ‘oh‚ what do you want boy?’ So everyone was raising their eyebrows‚” she said.

Transpeople can visit specialists at Groote Schuur Hospital‚ Cape Town‚ for its transgender service or go to private endocrine specialists. The transgender clinic consists of a team of people from different departments‚ including psychiatry‚ endocrine and plastic surgery.

Elma de Vries‚ a family physician who does training in gender-affirming health care for Gender DynamiX‚ said the transgender service at Groote Schuur has limited capacity.

Trans sex-worker and activist Leigh Davids says the waiting time for gender affirmation surgery is over 25 years at Groote Schuur.

It is also expensive‚ with the fees for a surgeon and anaesthetist‚ the surgical theatre cost and several days hospital stay.

“The cost is too expensive. That is why currently in South Africa‚ transpeople still have the body they were born with. The minute you have the actual surgery‚ society finds you okay. You become safe within society because now you look like society‚” says Davids.

De Vries said if a transperson can’t afford hormones‚ they will sometimes self-medicate by getting hormones illegally. She said this is dangerous.

“Often people feel unhappy about their body. When they’re on hormones and the changes start coming‚ they feel happier‚ because their body is aligning with what their identity is‚” explains De Vries.

“If I’m on hormones and I had the surgery‚ maybe people wouldn’t view me as a woman‚” says Nandipha Ngoloti‚ a 29-year-old transman. He would like to receive hormone therapy next year.

He said most people don’t believe him when he says he is transgender because he still has the parts of a woman. Ngoloti is currently unemployed and would need financial support from his aunt and uncle if he did get hormone treatment.

Feminising hormone treatment with oestrogen can cost between R1‚000 and R1‚600 per month. A masculinising regimen with testosterone can be from R250 to R800 per month. In addition there are the costs of blood tests.

Ngoloti lives in Mbekweni‚ Paarl‚ and says he is often subjected to hate speech. Seven years ago Ngoloti was threatened with rape.

Gay and Lesbian Network faces closure due to cash crisis

The Gay and Lesbian Network says it will have to shut its doors unless they get a R600‚000 windfall.
News
2 years ago

“One of the men came to my face and said‚ ‘I will never share a toilet with you and I’ll show you what a man does to a woman.’ He meant rape. Oh my God‚ if I had been walking alone‚ what could’ve happened?” says Ngoloti.

He doesn’t dare go out at night to restaurants‚ bars or clubs. “It’s very sad and frustrating. I should be free to go to restrooms and to have fun like everyone else but it’s difficult because I’m scared of what will happen. I don’t have that life.”

A 2016 report‚ Hate Crimes against Lesbian‚ Gay‚ Bisexual and Transgender (LGBT) People‚ surveyed 2‚130 South Africans in an online study. It found that “confidence in the justice system is clearly low. Very few of the incidents of discrimination were reported to police. Considering that many of these incidents were of a very serious nature‚ the non-reporting is a significant concern”.

The report said more than half of those who had suffered discrimination said their experiences when reporting the incident were very negative.