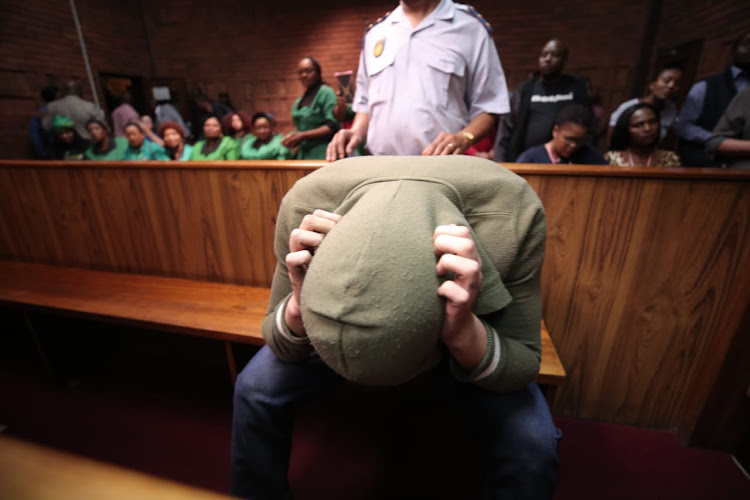 The man accused of sexually assaulting a girl at a Dros restaurant appears in the Pretoria magistrates court on November 1 2018.
Image: Alaister Russell/The Sunday Times

A man accused of raping a girl in a Dros restaurant appeared in the Pretoria Magistrate’s Court on Thursday‚ wearing a green hoodie to hide his face.As he took his seat in the dock‚ the 20-year-old clenched his hands on each side of his bowed head.

He stands accused of raping a child in a bathroom in the restaurant’s Silverton branch‚ and has been remanded in custody since his September arrest.

On Thursday‚ the prosecution and defence argued that it was in the interests of justice for him to be admitted to a psychiatric hospital for observation.

Legal Aid attorney Riaan du Plessis said there was a history of mental illness in the accused’s family‚ that the accused had been diagnosed with bipolar disorder and had undergone treatment for substance abuse as a teenager.

“He started using substances when he was 14 years old … The accused has also harmed himself due to his mental health‚” Du Plessis told the court.

State prosecutor advocate Sanet Jacobson also advised the court that some of their investigations were incomplete‚ including a toxicology report on a substance found on the accused after the incident.

The man will remain in custody and be moved to the Weskoppies Psychiatric Hospital in Pretoria for observation until the case resumes on November 28.

A man accused of raping a girl in a Dros restaurant appeared in the Pretoria Magistrate’s Court on November 1 2018. The prosecution and defence both argued that it was in the interest of justice for him to be admitted to a psychiatric hospital for observation.

Magistrate Thandi Theledi made the ruling after granting an application by the defence for an extra psychiatrist and clinical psychologist to observe the accused.

“In the interests of justice‚ and keeping in mind the fact that unnecessary delays have to be avoided at all costs‚ balancing it with the fact that a fair chance has to be afforded not only to the alleged victim but also the accused‚ an order is made that the accused person be referred to Weskoppies‚” said the magistrate.

Du Plessis said the accused was diagnosed with bipolar disorder in January 2013. The accused shed a tear when Du Plessis told the court about his history of self-harm.

The suspect told the court on October 2 that he would not apply for bail. He allegedly watched the little girl in the restaurant play area and later followed her to the bathroom. According to patrons‚ the child’s mother went looking for her after she noticed she was not in the play area and allegedly found her daughter with the man in the bathroom.

The man‚ who cannot be named until he has entered a plea‚ is facing a charge of rape‚ possession of drugs‚ intimidation and assault with the intent to cause grievous bodily harm.