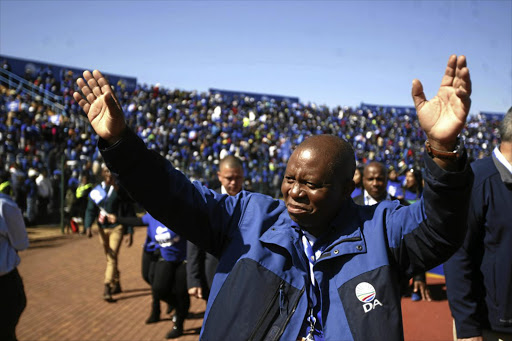 Herman Mashaba boasted about his first citizen's arrest on social media, to mixed response. Now a legal expert is questioning whether the Johannesburg mayor knew what he was letting himself in for.
Image: Vathiswa Ruselo

Anyone can make a citizen's arrest - but with great power comes great responsibility.

This was the warning from University of Pretoria (UP) criminal law expert Llewellyn Curlewis after Johannesburg mayor Herman Mashaba made his first citizen's arrest in the Johannesburg CBD on Monday.

"You have to ask yourself if the arrest was the only way of getting that person into a court of law. Remember, an arrest is only a means of getting someone to court. There are other methods," Curlewis said.

Mashaba arrested a man who was pushing a trolley filled with severed cow heads in the city centre.

"Did he have to arrest him? Did he want to make a point? Was it a political gimmick?" Curlewis asked.

Johannesburg mayor Herman Mashaba made his first citizen's arrest on Monday after a man was pushing a trolley stacked with slaughtered cow heads in ...
News
3 years ago

He continued: "The fact that it was a lesser crime is going to raise eyebrows. You have to ask yourself couldn’t he have just phoned the police or the city of Johannesburg to serve a summons on the man to appear in court for him to explain why he trespassed this bylaw?"

Curlewis said anyone could make a citizen's arrest, but that the person must either witness the crime or have reasonable grounds to make the arrest.

Did he have to arrest him? Did Mashaba want to make a point? Was it a political gimmick?

"If a woman shouts from the first floor of her balcony, ‘Stop that thief! That thief stole my handbag’, then you have reasonable grounds or suspicions to arrest that person … If you did not witness it yourself, you have those reasonable grounds [on which to defend yourself]."

Curlewis said a citizen's arrest could not be made with bad intentions.

"If I woke up this morning and decided I am going to arrest Piet because I enjoy seeing Piet suffer, I am definitely going to have a civil claim against me because I did not have bona fide reasons to arrest someone. Most people get away with the defence with the principle that they really thought the person committed a crime."

Curlewis said if someone was later released on a technicality it should not result in blowback for the person who made the arrest, unless the court deemed the citizen's arrest unlawful.

To make a citizen's arrest, you must inform the person that you intend arresting them and on what grounds.

"You have to take the necessary steps to make sure that person knows they are now in some form of detention. Naturally, the same principles of unlawful arrest apply."