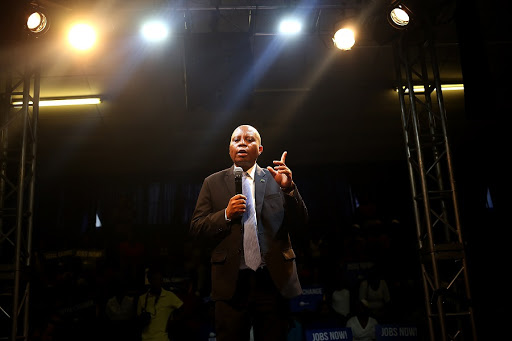 Johannesburg mayor Herman Mashaba has backtracked on a social media post in which he boasted of arresting an informal meat trader on the streets of Joburg.​
Image: Alon Skuy

Johannesburg mayor Herman Mashaba has apologised for an "insensitive" social media post about his citizen's arrest of a man pushing a trolley filled with severed cow heads.

"I apologise most sincerely to our residents for my comments relating to the meat also presenting a potential risk of an Ebola outbreak. I also apologise for what has appeared to be insensitivity towards the plight of informal traders in our city attempting to earn a living. With the benefit of hindsight, I can appreciate how my comment offended people with its insensitivity," Mashaba said.

I apologise most sincerely to our residents for my comments relating to the meat also presenting a potential risk of an ebola outbreak. pic.twitter.com/1vYIvOdKq7

"It was never my intention for the comments to be construed as an attack on any person or group – informal traders or our foreign residents. I am not above making a mistake and, when I err, I am willing to humble myself and apologise unreservedly to our residents."

Mashaba on Monday arrested a man in the Johannesburg CBD who was pushing a trolley of cow heads in the street. Mashaba said he was enforcing the Meat Safety Act of 2000.

Mashaba said his reaction was in response to the many residents who were unable to access quality healthcare and were "vulnerable to the kind of outbreaks that can arise from [the] improper treatment of food".

"This is true in both the formal and informal economy. Our healthcare facilities throughout the city are already stretched to the limit, and an outbreak would be disastrous for our residents."

Mashaba has asked the city’s health inspector to work with inner-city traders to help them understand safety standards.

The EFF's Johannesburg regional chair, Musa Novela, said on Tuesday that Mashaba had an "alien" attitude, especially given his own past.

"We are saying this because it is inconceivable for a former informal trader, who has on numerous occasions shared stories of being raised in harsh conditions by a domestic worker, could grow to hold such racist views which purport black people as uncivilised scavengers and carriers of deadly diseases."

Johannesburg mayor Herman Mashaba has defended his citizens’ arrest after a social media backlash saying he was harming small business - and health ...
News
3 years ago

The ANC greater Johannesburg region said the DA was advancing a vision of a "gentrified and influx-controlled city of Johannesburg in which black people come into the city as workers in the morning and go back to the townships, the urban reserves, in the evening".

"Cow and sheep heads, commonly known as skopo (a derivative from the Afrikaans word skop) along with mala mogodu (tripe) has been part of the diet of the majority of South Africans from time immemorial.

"Hundreds of formal and informal traders in Johannesburg and elsewhere make their living from selling skopo and other food items."

Food health expert Dr Harris Steinman said salmonella and klebsiella infections were some of the immediate illnesses that could be a problem.

"If this guy was buying the heads slaughtered at 6am, he was getting it and selling it at 7am, and it was being put into a pot and sold at 8am, 9am or 10am, the risk is very low, but we don’t know any of that."

Anyone can make a citizens’ arrest, but with great power comes great responsibility.
News
3 years ago

Steinman said transporting meat in the heat made it the "perfect culture medium" for bacteria to multiply, including listeria, especially if it was not cooked immediately.

"If they’re being slaughtered in a place like an abattoir where there is a low risk of listeria, because there is always listeria in the background, and the abattoir is badly looked after, there is the risk that listeria will also be present."

The Foodstuffs, Cosmetics and Disinfectants Act of 1972 states that anyone handling or transporting food must get a certificate of acceptability from their local municipality.

The definition of a vehicle in the act includes a trolley, wagon, cart, bicycle or sled. It states meat may be transported only in a clean vehicle used solely for transporting meat, must be hygienic and maintained so that during transport it is not contaminated by "flies, dust, filth, impurity or any other injurious matter or thing".

"Non-prepacked food may not be transported in such a manner that it comes into contact with the floor of a vehicle, the floor covering of the vehicle or a surface of the vehicle that can be walked on or with anything else that may pollute the food."

Johannesburg mayor Herman Mashaba made his first citizen's arrest on Monday after a man was pushing a trolley stacked with slaughtered cow heads in ...
News
3 years ago