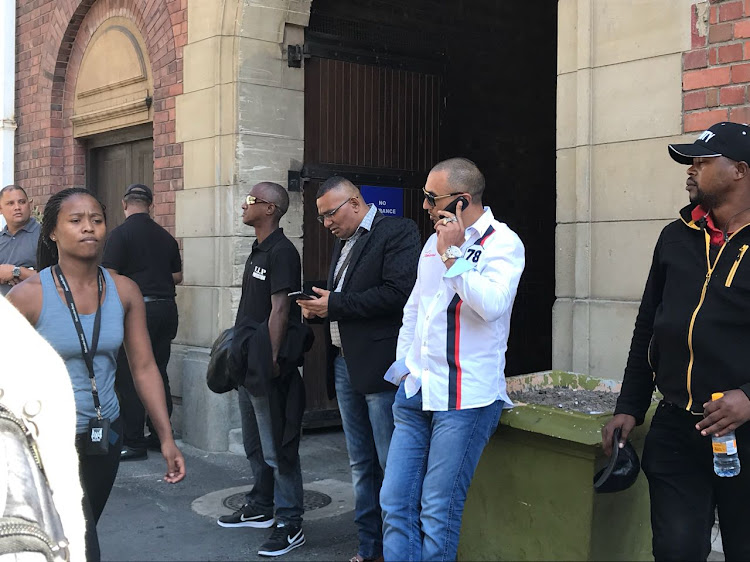 The state's key witness in a case about an alleged extortion racket allegedly run by Nafiz Modack and Colin Booysen was charged as an accessory to their crimes after incriminating himself in testimony before the Cape Town District Court on Tuesday.

Radley Dijkers took the stand as a Section 204 witness under the Criminal Procedure Act on Wednesday morning. This section of the Act is used when the state requires a person who may have been a party to a crime to testify against others.

Dijkers, the brand manager for the Grand Café Africa, was indicted on charges of being an accessory to extortion and rendering of security services without being registered as a security service, after the fact.

He was also charged with being an accessory to fraud, money laundering, and defeating the ends of justice.

The manager of Grand Café Africa, Radley Dijkers, said he "had no choice" whether or not to use the services of TSG, a security company which is ...
News
3 years ago

Dijkers testified that he was party to discussions at a meeting on November 8 2017, where his colleague and fellow manager told Modack and Jacques Cronje - the fourth accused in the matter - that they were "happy" with the service rendered by the security company.

His colleague, who was also a shareholder in the Harbour House Group which operated the Grand Café Africa, said they were happy with paying R90,000 for security services at an event. The R90,000 was allegedly extorted from the Grand Café by Modack and his co-accused.

Dijkers testified that he "had no choice" about whether he wanted their security services or not. He said that Modack suggested service providers for meat and ice which the Grand Café "should consider using".

He said his colleague did most of the talking at the meeting, where Modack offered her "financial assistance" and said he knew business people interested in buying out her shares in the Harbour House Group.

Dijkers informed the police about the meeting afterwards and a captain from the gang unit requested video footage of it.

A man accused of attempting to assassinate alleged Cape gang boss Jerome "Donkie" Booysen has been arrested for allegedly killing his accomplice ...
News
3 years ago

Two days after the meeting, Modack phoned Dijkers and, recording the call, asked him to repeat what his colleague had said about being happy with the security services.

Dijkers told the court on Wednesday he had been a "coward" who was afraid to express his true feelings.

"During this call and the second call I was being a coward. I wasn't willing to answer Mr Modack honestly because I was scared for my safety. I didn't want to tell him that I felt intimidated and threatened. I told him what he wanted to hear," said Dijkers.

He also said the way money was handed over to the alleged extortioners was "abnormal".

Modack and his group also allegedly charged them R150,000 for another event held in November 2017.

When state prosecutor Advocate Mervin Menigo asked if he had ever paid R150,000 to a service provider in cash, in a plastic bag at midnight, he said no.

"I've never experienced that in my 23 years of experience in the industry in Cape Town," said Dijkers.

Slain Cape Town lawyer Pete Mihalik’s name came up in the trial of alleged extortion racket bosses on Tuesday – to the chagrin of the opposing ...
News
3 years ago