Shivering 'hitman' in court for gunning down of lawyer Pete Mihalik 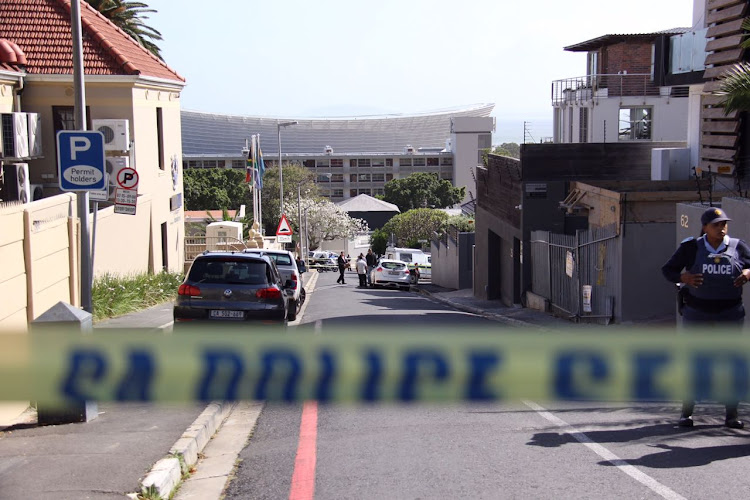 Police at the scene of the shooting of advocate Pete Mihalik outside Reddam House school in Green Point, Cape Town, on October 30.
Image: Anthony Molyneaux

The man who allegedly pulled the trigger in an apparent hit on Cape Town advocate Pete Mihalik stood shivering in the dock at the Cape Town Magistrate's Court on Thursday.

Sizwe Biyela, 26, appeared briefly with his co-accused, Nkosinathi Khumalo, 31, and Vuyile Maliti, 35, surrounded by members of the police anti-gang unit.

Khumalo finally opted to be represented by a legal aid attorney. On two previous appearances he insisted on hiring a lawyer out of his own pocket.

Slain Cape Town lawyer Pete Mihalik’s name came up in the trial of alleged extortion racket bosses on Tuesday – to the chagrin of the opposing ...
News
3 years ago

Biyela had already applied for legal aid during their first appearance on November 1, two days after they were arrested - which was within hours of Mihalik being shot dead outside Reddam House Primary School in Green Point.

Biyela and Khumalo gave KwaZulu-Natal addresses. Well-placed sources told the Sunday Times that the two men were allegedly each paid R250,000 for the “hit” while Maliti, an alleged middleman, received R500,000 from two crime bosses.

In contrast to the evident fear on the faces of Biyela and Khumalo, Maliti seemed calm and healthy. He was represented by BDK Attorneys, the Johannesburg law firm that also represented Duduzane Zuma in July.

The case was postponed to November 29 for a bail hearing.

State prosecutor advocate Helene Booysen told the court that the state would oppose bail for the men.

Maliti was represented by Inge Jansen as a proxy for BDK attorney Jannie Kruger.

A third suspect in advocate Pete Mihalik’s murder has been arrested and is due to appear in the Cape Town Magistrate’s Court on Thursday.
News
3 years ago

Kruger said that Maliti and the defence team had not seen the police docket. He said Maliti intended to bring a formal bail application and was not considering a plea bargain. But he said they were unable to decide on the way forward as they did not know what was in the docket.

“The biggest travesty in this country is that the defence is not furnished with the full dossier at the stage of the bail application. The state is standing with their cards against their chest, you are walking around in the dark. You don’t know what they have against you, so you are in a very bad position as an applicant for bail,” he said.

He said that he had spoken to investigating officer Lt-Col Charl Kinnear when they had negotiated Maliti’s handover to the police.

Sources told TimesLIVE that Biyela and Khumalo may have fingered Maliti for his alleged involvement in the case after their arrest.

Mihalik’s “friends” and underworld groups then scoured Cape Town in search of the taxi boss.

“We spoke for a long time, but (Kinnear) is also playing his cards very close to his chest. I don’t know what they have. During the bail hearing they’ll have to tell us how he is linked to the crime,” said Kruger.

Kinnear made accusations earlier this year during a bail hearing involving an alleged extortion racket run by Nafiz Modack and Colin Booysen that Mihalik acted as a facilitator in the extortion of “rich Jewish businessmen” in Cape Town.

Kruger said that he did not know where the money for Maliti’s legal representation came from but said “what I asked, I received”.

“I just told them how much money I want as a deposit and then they naturally have to pay that to me. Where that comes from I don’t know, I don’t ask that,” he said.

No photographs of “legal practitioners” may be taken during the trial of extortion accused Nafiz Modack and three others.
News
3 years ago