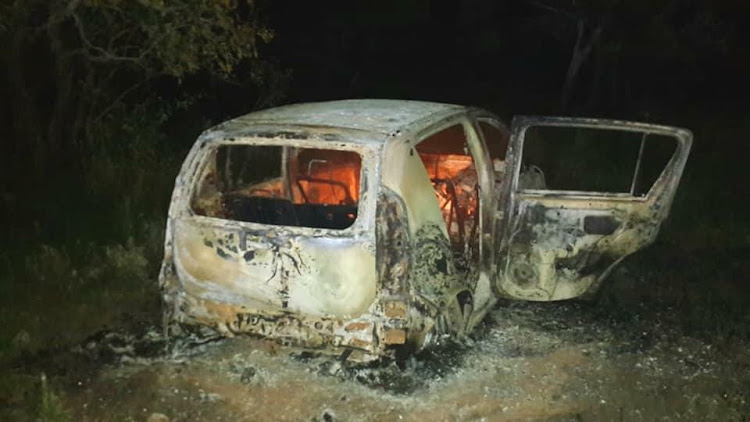 Gunmen torched the vehicle of a Ugandan businessman after his kidnapping him from his Veralum home.
Image: Supplied

A Ugandan businessman abducted from his home in Veralum and held for ransom by gunmen was rescued on Thursday night by security guards while his captors were stringing him up in a tree.

Reaction Unit South Africa’s Prem Balram said the kidnappers had told the 24-year-old that they needed a lift to a nearby hospital.

“As the victim stepped out of his home, he was approached by four men who were armed with guns who demanded valuables and cash from him,” he said.

After stealing a TV and other household items, the man was bundled into his car and forced to drive off into the night, leaving his girlfriend and brother behind.

“The victim's brother received a call from the men demanding R25,000 in cash for his release. They then instructed him to bring the money to an isolated location near Trenance Park,” Balram added.

He said that security guards had descended on the area in search of the man.

“Reaction officers then called out to the victim and heard him screaming for help several metres down an embankment.”

“He was found bound with ropes around his neck and legs. He informed us that the men were in the process of hanging him from a tree.”

They later found his car, which had been torched.

Police spokesman Lieutenant Colonel Thulani Zwane said a case of kidnapping, malicious damage to property and attempted murder had been opened at the Verulam police station.

Sharp detectives have bust a Durban couple after spotting a local security company's post about them being robbed while having sex in an isolated ...
News
3 years ago