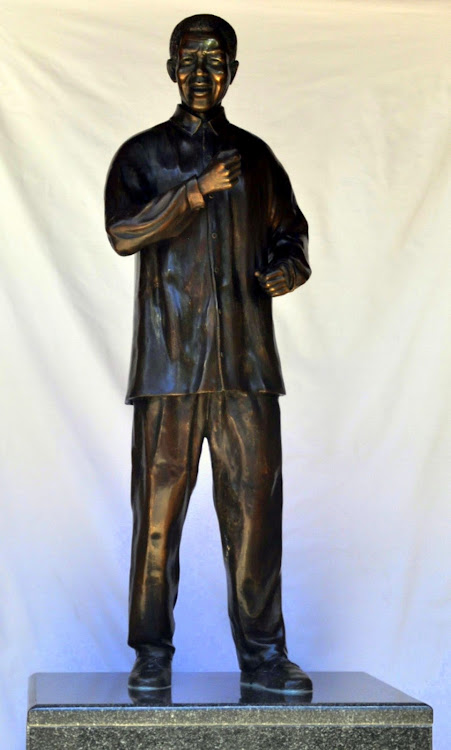 The 1m tall replica statue of Nelson Mandela that will be unveiled on Friday on Nelson Mandela Square in Sandton, Johannesburg.
Image: Supplied/Clockwork Media

A new statue at Nelson Mandela Square in Sandton is aimed at making the "impossible possible" by letting visually impaired people "see" the late statesman.

Exxaro mining, Rotarians of Rotary District 9400, the Nelson Mandela Foundation, the South African National Council for the Blind and Liberty 2 Degrees (L2D), which is the Liberty Group's listed property vehicle,  partnered to create the 1m  replica of the Mandela statue that will be unveiled by the struggle icon's widow Graça Machel in Sandton on Friday afternoon.

"By enabling the visually impaired to touch and interact with the famous Madiba statue, a privilege many of us take for granted, we will enable them to 'see' the statue in their own special way.

"The ultimate aim of this unique collaboration is to spread the magic of Madiba and also raise awareness of the plight of visually impaired people in Africa and beyond," Mgojo said.

The statue was made by Kobus Hattingh, the same sculptor who - along with Jacob Maponyane - made the 6m Mandela statue which was unveiled at the square in March 2004.

"It is like he knows he is in America and he's ready for the police."
TshisaLIVE
3 years ago

Hattingh, who is based in Mooinooi, North West, also sculpted the 6.5m Madiba statue at Naval Hill in Bloemfontein, among other artworks.

"I came to the realisation that everyone who said beautiful things about him did not exaggerate in any way. It’s all true and more. His insight as well as the genuine humility with which he treated ordinary people will always stick with me."

Nelson Mandela's legacy lives on at the UN in New York

A life-size statue of the late former president Nelson Mandela was unveiled at the United Nations (UN) headquarters in New York in the US on Monday.
News
3 years ago

While politicians across the country were painting clinics and giving to the poor ‚ the president of the Economic Freedom Fighter Student Command‚ ...
Politics
5 years ago