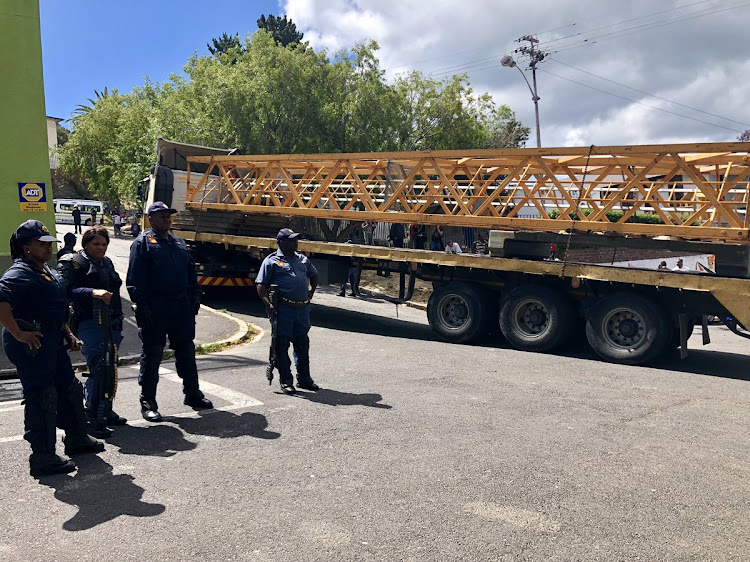 A mobile crane was forced to leave the Bo-Kaap after residents protested against construction work on Wednesday, November 21 2018.
Image: Natalie Elliott

Bo-Kaap residents enjoyed a small victory on Wednesday as a mobile crane left the historic neighbourhood in Cape Town after they protested against the construction and development happening there.

The crane was removed at about 11am, apparently because workers were "traumatised" after police were called in to remove protesters from the streets on Tuesday, said Bo-Kaap Civic Association vice-chairman Fowzia Achmat.

Residents took to the streets to vent their opposition to the construction of a high-rise apartment complex.

One crane almost made it to the construction site after police threw stun grenades to clear a path for the machine.

However, a hill leading to the construction site proved too steep for the large crane to climb and residents cheered in their victory.

In another win for the activists, applause sounded in the gallery of Cape Town magistrate’s court as charges against the five people arrested during protests yesterday were withdrawn.

The charges were “too broad”, according to their attorney, Women’s Legal Centre director Seehaam Samaai.

Residents protesting against a new development in the Bo Kaap clashed with police on Tuesday in Cape Town.
News
2 years ago

The court order interdicts the Bo-Kaap neighbourhood watch and the protesters from, firstly, trespassing on the development sites and, secondly, vandalising, sabotaging, committing arson or damaging any of the applicants' property including but not limited to its construction site, construction vehicles and equipment, and, thirdly, interfering with, intimidating, threatening and/or harassing... the applicants' staff, its contractors' staff or any third party engaged to provide a service to the applicants.

It also interdicted them from obstructing the route of a mobile crane and also interfering with the erection of the crane.

Samaai said that the force the police used against the community was disproportionate to the nature of the protest. It only fuelled the conflict.

“There was no public violence so they can’t charge them under the Gathering Act... it is clear on protesting,” Samaai said.

TimesLIVE reached out to the development company, BLOK, which then referred to their attorney, Lauren Fine of Norton Rose Fulbright.

Fine has not yet responded, and it is unclear if or when a new crane company will be hired.

Mayhem in Witsand over building of community hall

Tear gas‚ rubber bullets and stun grenades were fired on Thursday at protesters from Witsand‚ near Atlantis‚ who built barricades using trees and ...
News
2 years ago

Between May and November builders have walked off the sites of 37 Eastern Cape schools under construction, due to national government's non-payment ...
News
2 years ago