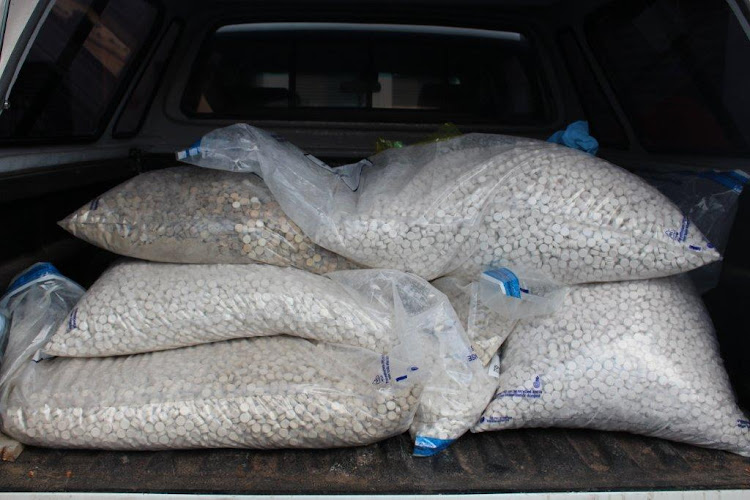 Bust and bagged These mandrax tablets are among R8.9-million worth of drugs which were confiscated by the Hawks during an intelligence-driven operation last week.
Image: Hawks

A second suspect was arrested on Wednesday in connection with a R8.9m drug bust in Somerset West in the Western Cape last week.

The 45-year-old suspect is believed to be the lessee of the storage facility in Somerset West Business Park where large quantities of tik, heroin and mandrax were found by investigators from the Hawks' Narcotics Enforcement Bureau and police crime intelligence.

Hawks spokesperson Captain Philani Nkwalase said the suspect had handed herself over to police after they discovered that she was renting the storage unit where the narcotics were discovered.

The Hawks have arrested a 25-year-old Cape Town man for possession of drugs worth more than R8.9m.
News
2 years ago

On November 14 investigators arrested 25-year-old Moegamat Rafiek Hayners at the storage facility where an illegal firearm was also confiscated without ammunition.

A vehicle belonging to Hayners was also seized during the raid.

Hayners is also a suspect in a culpable homicide case in the Wynberg Magistrate's Court after he allegedly killed a 6-year-old girl and her nanny in a hit and run incident in Lotus River this year.

He is expected to appear in the Somerset West Magistrate's Court for a formal bail hearing on December 22 in the drug matter, when he will be joined by the 45-year-old woman. They both face charges of dealing in drugs, while Hayners faces an additional charge for possession of an illegal firearm.

"The Hawks national head, Lieutenant-General Godfrey Lebeya, has applauded the arrest and discovery by the multidisciplinary team, adding that the identification and seizure of the drugs demonstrated the police commitment to reducing the availability of dangerous drugs in and around Cape Town," said Nkwalase. 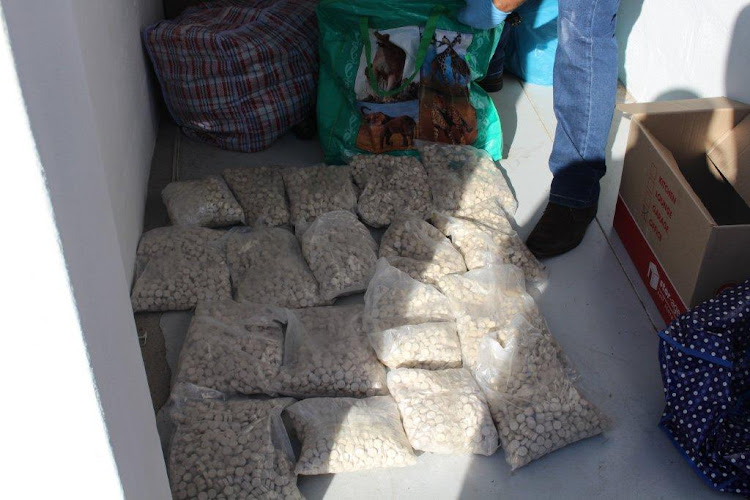 Police on Wednesday November 14 2018 arrested a man in Somerset West with about R8.9m in drugs.
Image: Hawks

In July last year the Sunday Times reported that a warehouse in Somerset West was used to store 1 ton of heroin before it was packed into wine boxes.

The boxes were then taken to a wine farm in Villiersdorp where they were to be shipped to Spain with a consignment of export quality wine. 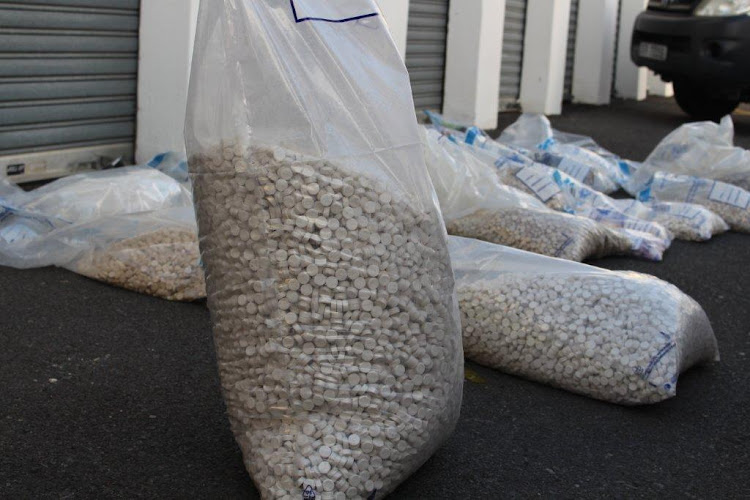 Mandrax is a synthetic drug similar to Quaaludes and is smoked across South Africa, typically with dagga.
Image: Hawks

The boxes filled with heroin collapsed under the weight of the wine on top and farm workers, upon uncovering a powdery substance inside, called the police.

Police soon busted a 23-year-old Dutch man, who allegedly transported the heroin from the storage facility in Strand to the farm.

Another suspect, Belgian citizen Peter Hering, was arrested in that case and is believed to be one of the alleged kingpins in what was at the time one of the largest drug busts in South African history.

New Zealand police and customs officials said on Friday they seized 190 kg of cocaine with a street value of up to NZ$36 million that arrived in ...
News
2 years ago

A bootload of pharmaceuticals has been seized as part of a Hawks probe into an alleged illegal medicine distribution network involving multiple ...
News
2 years ago

Two KwaZulu-Natal men have been bust with 22‚200 capsules of heroin‚ 2‚826 pieces of rock cocaine and 505 mandrax tablets with an estimated street ...
News
2 years ago
Next Article