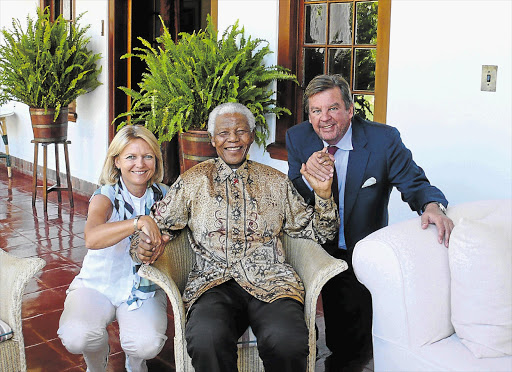 Nelson Mandela with Gaynor and Johann Rupert, who have been helping people attain ownership of the properties they have been living in for decades without security of tenure.
Image: File phot

The Ruperts are well-known philanthropists with their hearts in the Karoo, where sources of income are as scarce as rainfall on the arid land.

In their latest philanthropic project, they are quietly providing residents of Aberdeen with title deeds to their own homes and training youth for future careers.

Aberdeen is Gaynor Rupert’s home town. Her father was a master builder and built the magnificent church in the town centre. Her husband Johann's antecedents hail from Graaff-Reinet.

At a ceremony this month, 70 residents of the Karoo town of Aberdeen walked into the presentation hall as tenants and out as home owners, with full freehold title made possible by the Ruperts. The pair are significant sponsors of the Khaya Lam [my home] land reform project, organised by the Free Market Foundation (FMF).

A total of 117 full ownership title deeds were handed over to people in the Stellenbosch Town Hall on Tuesday for council properties for which they ...
News
4 years ago

Before personally handing the title deed certificates to recipients, Rupert said the people of the Karoo were a "special breed". He spoke about how poor both his mother and father had been as "children of the depression" and had never let him forget his origins. Anton Rupert, his father, used to remind him that this region produced the Rev Beyers Naude, Robert Sobukwe and the Cradock Four.

Introducing Rupert, council speaker Tembisa Nonnies said: "Ek het [I have] evidence! Twenty-four schools in the area have computers and internet. Nobody goes to school hungry. The pupils might arrive hungry but they get a nourishing porridge every morning. At 7 o’clock every morning there are ladies who start cooking the porridge, thanks to the Ruperts," she said.

Khaya Lam facilitates the conversion of council-owned rental properties into freehold title, at no cost to the recipients.

Free Market Foundation executive director Leon Louw said in a statement: "It was an extraordinary event. The Ruperts ... are sponsoring the most profound reversal of apartheid possible: title deeds for black victims of the apartheid land-dispossession legacy.

Tembisa Nonnies vouches for the Ruperts' sponsorship in Aberdeen district

"A generation after apartheid, most black people do not yet own their land. The Ruperts have risen to the challenge. They are personally committed to the reversal of racist land dispossession," said Louw.

The event took place in Graaff-Reinet at the South African College of Tourism (SACT), which was founded and is funded by Gaynor Rupert.

The presentation of title deeds followed a graduation ceremony of 92 hospitality students from disadvantaged backgrounds, who will go on to forge careers in the tourism industry, supported and guided by the college.

On December 3, in Stellenbosch, Johann and Gaynor Rupert plan to present more than 326 title deeds that they have sponsored.

The FMF said titling in South Africa is a painstaking process complicated by lack of records of ownership and bureaucratic complexity.

"Each area has its own issues and complications. It takes time and commitment to work through individual difficulties to eventually be able to present the right title deed to the right recipient. It requires sponsors like the Ruperts, who are willing to fund this process," said the foundation.

Rich give billions to charity

Rich South Africans are doling out more for charitable causes than the top 200 companies combined. Nine out of 10 of the country's high-net-worth ...
News
8 years ago

Exploring the quirky history of Aberdeen in the Karoo

At the launch point for a Karoo road trip, nostalgia kicks in for Nick Yell as he reminisces about an early life spent in Aberdeen There's a ...
Lifestyle
7 years ago