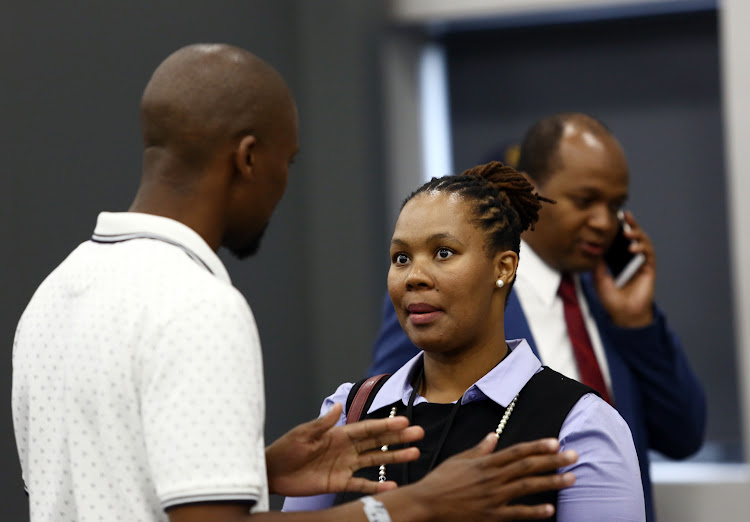 Former National Treasury communications chief Phumza Macanda at the state capture inquiry in Parktown, Johannesburg, on Monday November 26 2018. Macanda was 'flabbergasted' to learn that finance minister Des van Rooyen did not have the phone number of his 'adviser'.
Image: Masi Losi

A Gupta-linked adviser was a law unto himself, calling the shots at the National Treasury even before Des van Rooyen was sworn in as finance minister.

This was revealed by former Treasury head of communications Phumza Macanda, who was testifying before deputy chief justice Raymond Zondo at the state capture inquiry on Monday.

Even before Van Rooyen was sworn in as minister of finance on December 10 2015, Macanda said, Mohamed Bobat had already begun issuing instructions to her and other senior Treasury officials.

A suspected Gupta ally who parachuted into National Treasury as an advisor to former finance minister Des van Rooyen allegedly acted as a law unto ...
News
3 years ago

"In my interaction with him, I got the sense that that he was ignorant of the rules but he was also not interested in what the rules were. Even if the rules were there, he would disregard them and he would ignore them … He was a little aggressive towards me, his manner was almost hostile," claimed Macanda.

"He was telling people to move so that he could sit as close to the minister as possible … I do not know where Bobat derived his powers but in the first two minutes that I engaged with him, he made it very clear that he had authority. Where he derived it from, I do not know," she said.

According to Macanda, at the first meeting with senior executives that was called by Van Rooyen, then deputy finance minister Mcebisi Jonas was not present. She found this strange.

She told Zondo that instead of Van Rooyen addressing key policy issues in the meeting following negative market reaction to his appointment, the minister instead introduced Bobat as well as Ian Whitley, who was to be Van Rooyen's chief of staff.

"The minister informed the meeting that whatever needed to come to his office had to go through his adviser (Bobat) and his chief of staff (Whitley). The minister said everything had to be done with the approval of the two gentlemen," she said.

In the meeting, Macanda said the minister issued what she deemed a "poor" statement aimed at calming the markets following Nhlanhla Nene's shock axing.

She said Van Rooyen instructed her and former National Treasury director-general Lungisa Fuzile not to make changes to the statement.

When Des van Rooyen was appointed as finance minister he could not tell the difference between the man he was appointing to be his advisor and the ...
Politics
3 years ago

Macanda further told the commission that it was evident in the meeting that Bobat and Van Rooyen didn’t know each other, despite Bobat being the minister's adviser.

She recalled how when Bobat asked why the minister had not called him, he (Van Rooyen) said he didn't have Bobat's number.

"Bobat said to the minister: 'I called you, why didn’t you return my call?' The minister then said: 'Oh, I have been getting a lot of phone calls, people congratulating me and the thing is, I do not have your number, so I could not return your call'," Macanda recalled.

"I was flabbergasted to say the least, I was shocked by his manner towards the minister because he was quite dismissive but also, if he doesn’t have his  number, then how (did) he become the minister's adviser?" asked Macanda.

Trillian CEO knew Nene would be sacked, made a killing on rand's fall

Trillian CEO Eric Wood pocketed "hundreds of millions of rand" after buying up US dollars shortly before Nhlanhla Nene was sacked as finance minister ...
Politics
4 years ago