'Ronald, I am sorry' - Banner pleading for forgiveness erected at Cape mall 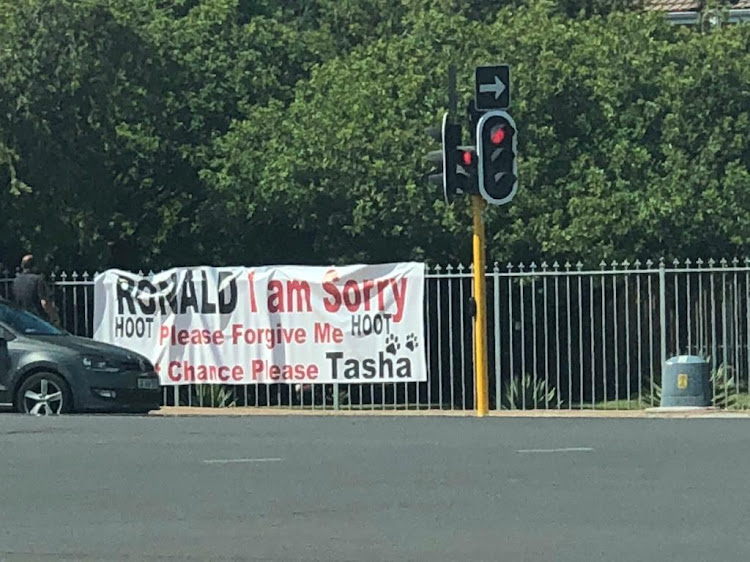 The banner that was put up outside Bayside Mall in Cape Town on Wednesday.
Image: Andre Jurgens

Asking for forgiveness requires you to humble yourself and, at times, go to extreme measures.

A Cape Town woman has seemingly taken ways of asking for forgiveness to the next level.

In an attempt to salvage her relationship with a certain Ronald, she put up a banner opposite Bayside Mall on Blaauwberg Road, Cape Town, on Wednesday morning.

"Ronald, I am sorry. Forgive me. One last chance please. Tasha," read the banner.

It is not clear as yet if the banner is an advertising gimmick - or a desperate need to apologise.

Facebook users were left puzzled after the banner was posted on a Cape Town community group.

"Will Ronald forgive Tasha? What has Tasha done? Why, poor guy?" were some of the questions asked by the social media users.

South Africans are known for their sense of humour, even in difficult times. The comment section was buzzing with funny remarks.

"Clearly a repeat offender as she is asking for one last chance. . . anyhow Ronald, she has made an impassioned public plea for forgiveness. . . do the right thing. . .and. . . tell us what she did. . .we are all involved now," one comment read.

"It's pretty obvious - she made his dinner too late."

"I have a feeling Tasha has done this before."

Some even encouraged him to run away and never return.

Is that an ad on the billboard? No‚ it's art

If you pass the corner of Strand and Rose streets in Cape Town in the next three months‚ look up. No‚ that is not a commercial on that billboard. ...
News
3 years ago

Johannesburg model and banking analyst Shivani Govender, 25 always hoped to have her name and face on a billboard, as she was a winner of Miss India ...
News
3 years ago