WATCH | Girl screams as man attacks car in Johannesburg - but her dad was in the wrong, says angry driver

A trip to a primary school in Johannesburg culminated in a road rage incident for a man and his 7-year-old child. TimesLIVE has spoken to both of the protagonists - and they blame each other.

In the video footage, Itumeleng Kgoleng and his daughter are seated in his car while a man bangs on the driver side window.

The man, who has been identified as Steve Matavhulule, appears to be angry.

Matavhulule walks to the other side of the car, and pulls on the door handle while banging on the window.

The 7-year-old girl is heard screaming in the car.

Matavhulule walks back to the driver-side window, bangs on it and pulls the handle.

He then gets a hardware tool from his bakkie and returns to the driver's side window. He bangs on the window with his hand one last time before the video ends.

Kgoleng explained to TimesLIVE on Thursday afternoon what led to the ordeal.

"What happened was is that we were at the robot and there was a traffic jam. We were parallel, so I asked to move in front of him but he refused. The next driver agreed.

"I teased him and poked out my tongue to show him I was cool and got a spot," Kgoleng said.

He said when the robot turned green, he was travelling behind Matavhulule.

"The man [Matavhulule] stopped at the next robot and got out and came behind me. There were Metro cops and they told him to get out of the way. So I just drove off because I was late... Only to find that he was following me.

"Two robots later he cuts me off and gets out."

I poked out my tongue

Kgoleng said he could not understand parts of Matavhulule's language, but he was swearing and wanted him to get out of the car.

"From the first robot I poked my tongue out, so I don't know if it was because of that.

"I drove off again and he followed me to the school.

He said he dropped off his child at school and phoned the police. A case has been opened at the Honeydew police station. 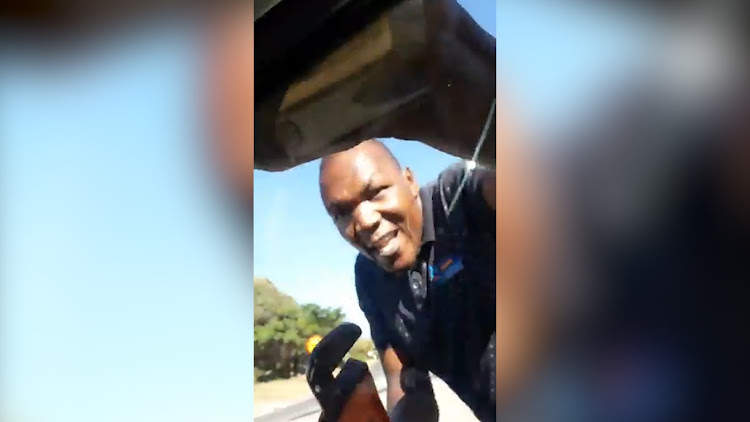 Matavhulule, meanwhile, told TimesLIVE that Kgoleng drove on the yellow line in traffic and nearly bumped his bakkie.

"You see these cars who drive on the yellow lane, one of them was him. He nearly bumped me, because he saw the cops and tried to swerve in when he saw the cops at the robot," Matavhulule said.

Matavhulule said at a second robot he turned down his window and asked Kgoleng why he was driving recklessly.

"He pointed at my car and told me that I am driving a company car and he will report me and nobody will believe this.

"He [Kgoleng] was in a lane turning right and I was at a lane going straight. He tried to squeeze in between me and the car behind me. I just heard a noise at the back and applied the brakes."

Matavhulule said he stopped when he saw traffic officers at the next robot and told them that Kgoleng was driving recklessly.

"The traffic officers told me that we should make a statement but the guy sped off.

I just wanted him to say sorry and account for what he did...

"I thought he was running away, so I followed him to Northgate. I made a shortcut to block him. When he stopped, he took out a camera. I told him to take responsibility for what he did," he said.

He agreed that that he had banged on the car's windows: "I was just trying to scare him so that he can open the car so that he can tell me what he was doing.

"I just wanted him to say sorry and account for what he did, that's all."

However, Kgoleng denied this version of events.

WATCH | That's going to be expensive! - Woman wrecks BMW i8

If you think you're having a bad day, chances are it's not as bad as the one this woman experienced when she smashes a BMW i8 into a neighbour's ...
News
3 years ago

Got road rage? Just play music and count from one to ten

A taxi cuts you off‚ you nearly drive into the pavement. The switch inside your head goes on‚ and you're fuming. But before the red mist decends and ...
Lifestyle
3 years ago