Women inspired to share their stories after Oprah speaks in Soweto 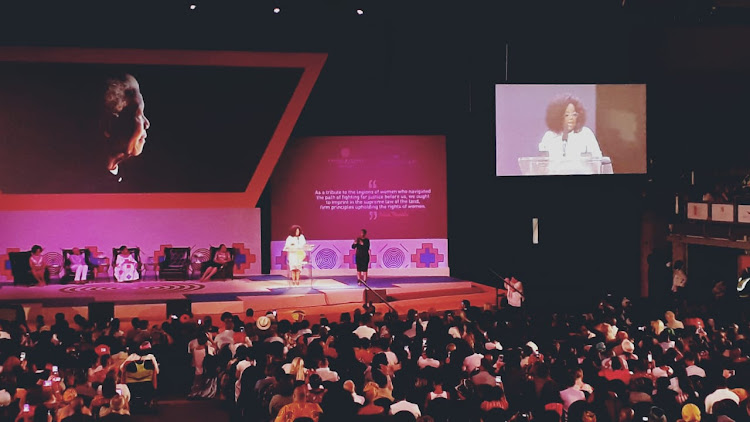 Women who attended Is'thunzi Sabafazi – The Dignity of Women - at the University of Johannesburg's Soweto campus said they were inspired and empowered to change the world after hearing the keynote address on Thursday by television icon Oprah Winfrey.

The event was hosted by the Nelson Mandela Foundation as part of the remembrance period to mark five years since the passing of former president Nelson Mandela  and to observe 16 days of activism against gender-based violence.

Graca Machel: Society has to be really human, loving, caring, protective and make our boys and girls to be part of the same values. #BeTheLegacy #mandela100 #livingwithpurpose

Winfrey had the audience dancing to her tune after she took to the podium and said sanibonani (good afternoon).

She recalled having spent 10 days as well as 29 meals at the late states man's home in Qunu in the Eastern Cape.

“What I learnt in those 10 days and nights and 29 meals was that his goodness, his integrity, his soul, could not be contained in a seven-by-nine cell [Robben Island], and I am here today, to remind us that even now his spirit lives,” she said.

Among those who shared their stories were Josina Machel, who detailed how she was physically assaulted by her then partner and subsequently lost her eyesight.

"When this horror happened to me, you would have though I would have had access to the best treatment in the police, in the hospital. The process to get to court took 18 months because my files kept on disappearing," she said.

Modiba Matema from Limpopo said she had no regrets travelling to Johannesburg to attend the event.

“I came here with the intention to be empowered and I was. Conversations around gender-based violence are very important. We must tell our stories and wear them like a crown.”

Matema further added that she intended to empower other women in her village who were not able to attend the event.

Judy Shiwundlana of Johannesburg said she was impressed by the address by Winfrey.

I want to thank Madiba for continuing to be that space where many of us still feel we are connected. His life and his legacy is still that glue where we feel we can come together but more importantly we have many missions to take forward. - Graca Machel#BeTheLegacy #mandela100