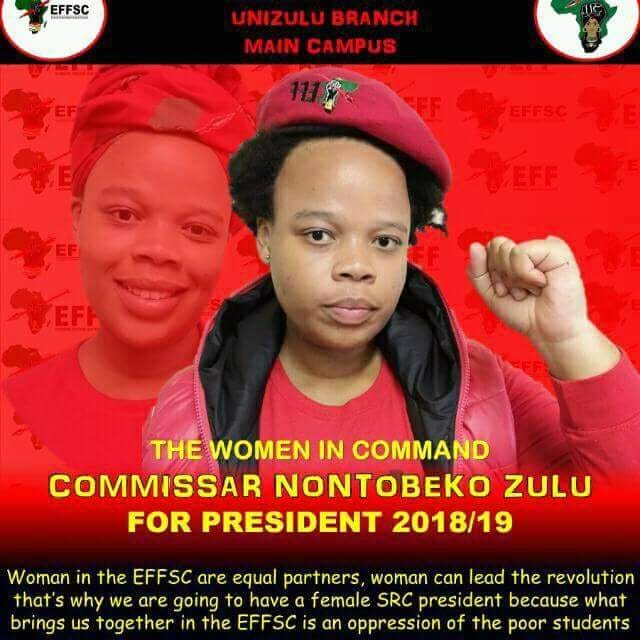 EFFSC leader Nontobeko Zulu was elected SRC president at the University of Zululand in October, along with eight other EFFSC members, who were elected on to the 15-person council.
Image: EFFSC Facebook

Three months after securing a major victory when they won the Student Representative Council (SRC) elections at the University of Zululand, Economic Freedom Fighters Students’ Command leaders have been kicked off the council for alleged serious misconduct.

In a statement issued on Thursday, the university announced that its council had taken a resolution to dissolve the SRC after a dozen members had been implicated. The university did not immediately name the students.

EFFSC leader Nontobeko Zulu was elected SRC president in October. She was the council’s third female president. Eight other EFFSC members were elected with her on to the 15-person council.

“They were found not fit to stand office and to be student leaders when 12 of the 15 were implicated in serious misconduct. An administrator will be appointed from the three SRC members who were not implicated in committing the misconduct.

“Consultations are under way with the three to determine who would be appointed as the administrator and the announcement will be communicated to all students once the process is finalised.”

In the statement, the university said it was “prioritising” the matter and appealed to students to allow the process to follow due course.

The University of Zululand Council took a resolution today.

The university’s director of communications and marketing, Gcina Nhleko-Mduli, told TimesLIVE that the university would meet on Friday morning to finalise the matter.

She said it was currently an internal process and that the police had not been involved, adding that the university couldn’t lay a charge on behalf of a third party.

Vusi Khoza, EFF KZN chair, said they had engaged with students about the allegations and were awaiting their response.

“We have heard the allegations out there about the misconduct being linked to theft of student funds. That is the university’s side. Now we are waiting to hear the side of the students. We have asked them to explain themselves. Once we hear that, then we will be able to comment on this matter.”

The Economic Freedom Fighters Students Command at the University of KwaZulu-Natal’s Howard College branch have raised an objection with the electoral ...
Politics
3 years ago