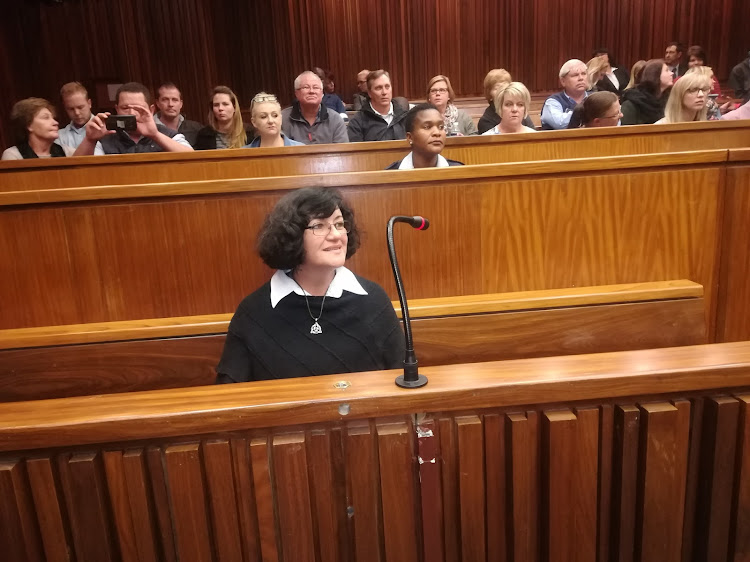 Convicted murderer Marinda Steyn looked one of her victims in the eyes, told her to pray and then stabbed her to death.

"I told her pray, I am going to kill you now. Then she started praying and then I killed her," Steyn told the High Court in Johannesburg on Friday afternoon.

Steyn, who is serving 11 life terms, was testifying about the murder of Mikeila Valentine, the wife of one of the accused, Zak Valentine.

She was dressed in a blue women's correctional services outfit.

Zak Valentine, Cecilia Steyn and Marinda Steyn's daughter Marcel Steyn are accused of murdering 11 people between 2012 and 2016. All three have pleaded not guilty.

In 2016 John Barnard was sentenced to 20 years in prison after a plea agreement with the state.

The group decided to kill Mikeila Valentine after she became suspicious of their murderous activities. On the morning of October 4 2012, Zak Valentine put sleeping tablets in his wife's coffee and gave the house keys to Marinda Steyn.

Steyn told the court that she went to the house and found Mikeila Valentine in bed. She said that after she murdered a 75-year-old pastor, Reginald John Bendixen, she had "a notion of hitting people over the head first".

She hit Valentine on the head with a hammer but, according to Steyn, the victim's head  bounced up and down on the pillow. When Valentine woke, still confused, Steyn said she started stabbing her.

"I did, except I didn't scream.

"She recognised me, so I told her to pray. She looked at me while I was stabbing her. I stopped stabbing her when she stopped breathing," she said.

Steyn said she changed her clothes, cleaned the house and made it seem like a robbery.

She took Mikeila Valentine's wedding ring, cellphone and tablet, which she dumped while driving home.

Steyn said when she arrived home she took a shower and put on fresh clothes. She was watching DVDs when she was informed about Mikeila Valentine's murder.

Roberts said it bothered him how Steyn could describe the murders as if she were at a "tea party, with no emotion whatsoever".

Steyn, who described herself as an emotional person, said she had taken time in prison to prepare herself.

She also took time on Friday to ask for forgiveness from the families of the people they had murdered during their five-year killing spree.

Roberts said that Steyn had been called to testify by Cecilia Steyn to exonerate her and to not implicate her daughter Marcel in the crimes.

Steyn denied this, saying she had received a Bible verse before she was sentenced that she had to confess her transgressions.

"I felt that God wanted me to confess first. My life has to change. I went through the whole process and realised that's what God wants me to do. I had to confess and speak the truth."

Judge Ellem Francis asked Steyn what had gone wrong in her life because Christianity did not include murdering people and committing crimes. "How does one explain all these murders, robberies that took place and you can see the families are still devastated. What went wrong?"

Steyn took a deep breath and said that it was difficult to explain but, "I now know I have peace that I have confessed and God has forgiven me".

She said she was also receiving treatment and attending courses in prison.

The trial was postponed to May 13.

Le Roux Steyn, the man convicted of the Krugersdorp murders, implicated his sister in the killings because he did not want to go down alone, his ...
News
3 years ago

Convicted killer Marinda Steyn told the South Gauteng High Court on Wednesday that she orchestrated the murder of a semi-retired pastor because she ...
News
3 years ago