'Rape is never the victim's fault. Clothing is not consent.' 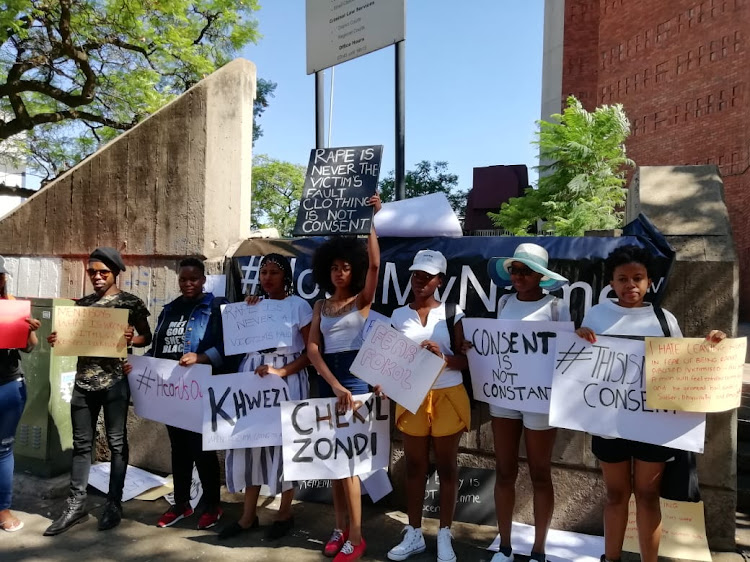 “Rape is never the victim's fault. Clothing is not consent.” That is the message teenage activist Zulaikha Patel wants to share during the 16 Days of Activism campaign against women and child abuse in SA.

Patel was part of a silent demonstration outside the Pretoria Magistrate's Court on Friday.

Two years ago, as a 13-year-old, she was involved in a stand-off with security guards while protesting against the Pretoria Girls' High schools policy on Afro hairstyles.

It is not a naked protest, we will be in shorts and t-shirts: Pretoria schoolgirl

A protest against gender-based violence scheduled for Friday will not be in the buff, contrary to previous assertions.
News
2 years ago

The group of protesters, most of whom wore shorts and T-shirts, stood at the corner of Francis Baard and Sophie de Bruyn streets in Pretoria on Friday, holding up placards.

"Cheryl Zondi", "Khwezi", "Rape is never the victim's fault", "Men and boys; what is wrong with us?" said some of the placards.

"We are here to make a statement, to say that clothing is not consent and that rape is never the victim's fault," said Patel.

"We need to come together to fight this cancer in our society. We need to unite as men and women. We need men to go out and speak out in their male circles against rape," she said.

The story of Cheryl Zondi, the brave young woman who took the stand in a South African court to testify against Nigerian pastor and rape accused ...
News
2 years ago

"Our future plans include educating people and we want to do so now during the 16 days of activism. We want society to stop policing women's bodies to the gaze of patriarchy."

She hoped that motorists driving past and seeing their messages would take them seriously and spread the word about gender-based violence.

Tiego Khoza, the only man who joined the protest, said he was there to motivate men and to challenge them to become a voice against gender-based violence.

"I'm here to show people that there are men who are concerned about the abuse of women. My message for men is that we should respect women.

"When we have young boys we should teach them to respect women and treat women as their equals and not treat them as people who are their subordinates, there to cook and please them in bed."

A survey of 135 health facilities designated to care for survivors of sexual violence in South Africa found that nearly half do not offer counselling ...
News
2 years ago

"[The justice system] shouldn't protect the perpetrators, like they are doing in the Dros case. His identity is hidden from the public, on what basis?"

He said the group chose to protest outside the court because most cases of rape were heard there. "We are here because cases are brought here and we are going where it happens the most."

Klara Dreyer, a Pretoria resident who walked past the protesters, commended the protesters. "They are not obstructing traffic or screaming at anyone. They are just stating their opinion and I think that's important."

She said she was a strong believer that the clothes worn by women should not determine how they were treated by men.

"I think you should be able to wear what you want. I don't think that's supposed to make a person think I can treat you this way or do this to you," Dreyer said.

The SA Police Service (SAPS) has given itself a pat on the back for sealing the fate of Parktown Boy's former water polo coach and sex offender, ...
News
2 years ago

Dineo Nchabeleng will stand against abuse, for her daughter's sake

Nelisiwe Sibiya on being abused: I remember it so clearly, I know the pain

She said she wants to use her own life to help influence those in need.
TshisaLIVE
2 years ago

ANC Women’s League president Bathabile Dlamini has made a veiled accusation that deputy president Cyril Ramaphosa has "the experience" of woman abuse.
Politics
3 years ago

Annie Naidoo* silently endured beatings from her husband for nearly 22 years‚ until he decided to smash a snooker ball in her face‚ leaving her blind ...
News
3 years ago