Image: serezniy/123rf.com Many of those who attended the Global Citizen Festival at the FNB Stadium in Johannesburg on December 2 2018 have recalled knife-point muggings.

South Africans have taken to Twitter to detail their crime horror stories after the Global Citizen Festival Mandela 100 concert on Sunday, with some explaining how they were mugged at gunpoint outside the stadium, with no police in sight.

Festival attendees who were waiting for Uber and Taxify cabs outside of the Nasrec Sasol garage after the concert reported that chaos broke out when a number of people were robbed at knife and gunpoint.

According to posts on social media, people flocked to the garage to wait for transport. There, they were harassed and mugged, which led to chaos outside the venue.

A witness told TimesLIVE that she saw a group of about seven men walking in between people.

“There was a couple walking in front of us. The next thing we knew the girl started screaming. They tried to grab whatever she was holding. It was such a mess. Everybody started running in between cars to avoid the thugs. Mind you, there were no police in the vicinity at all,” said Jamie-Lee Markgraaff.

Johannesburg Metropolitan Police Department senior management superintendent Wayne Minnaar said the JPMD was responsible for crime prevention with the SAPS. However, Minnaar said JMPD had its hands full directing traffic out of the FNB Stadium area.

CEO of Stadium Management South Africa Jacques Grobbelaar said SAPS and Global Citizen took control of the event as it was high-profile and involved 58 heads of state.

Grobbelaar lambasted the SAPS, telling TimesLIVE that after the last performance police left the area, which is against standard protocol.

“I was at the venue... police cleared out after the last performance. Usually we would stay for two hours after the event to ensure the safety and security of concert-goers.”

Four TimesLIVE journalists were also at the event and can confirm that no police were present after the event.

Many concert-goers shared their frustration with the organisers, saying they had feared for their safety.

@GlblCtzn I’m really disappointed in your guys complete disregard for our safety after the concert , people were stabbed , robbed on gun point and hijacked right outside the stadium. You really let us down as a country 💔#GlobaCitizenFestivalSA

#GlobaCitizenFestivalSA so heart broke by what was happening at sasol garage and outside the stadium I even tripped and fell. Thank God no one fell on me. Witness so many robberies. Police did nothing.

My heart breaks for all the Global Citizens who got mugged by Sasol garage after the festival. The screaming and shouting was heartbreaking 💔💔

If you are still leaving the stadium don't go past Sasol, they are robbing people at gun point.

Guys! We are huddled at Sasol garage and its so fucking dangerous. Groups of tsotsi’s run towards the crowds to cause commotion and then grab people’s shit and taunt them. Everyone so scared and them literally laughing and enjoying the chaos

While trying to get to my friends, we ended up being stuck at the Sasol as some nyaupe tried to grab my phone and scratched me in the process @nonimots & I fought back. Took these 👇🏽 to fight Incase we were attacked again. The brazenness was scary need I mention no cops in sight pic.twitter.com/QlMuLxP8M2

Wow counted 17 muggings at the Sasol at FNB. Plus 2 stabbings and a smash and grab. #GlobaCitizenFestivalSA 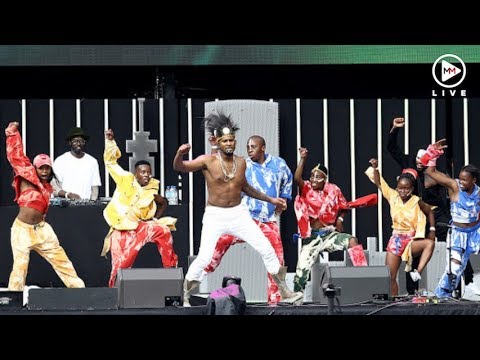