Twitter is helluva angry with billionaire Johann Rupert - here's why 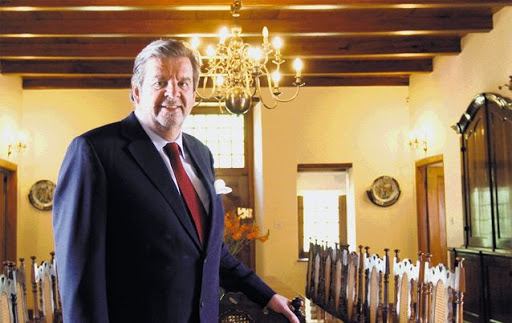 Billionaire Johann Rupert ruffled feathers and outraged many following his comments at the annual PowerFM Chairman's Conversation in Johannesburg on Tuesday night.

Hosted by the chairman of MSG Afrika, Given Mkhari, this year's event featured Rupert, whose comments about the state of the country had many on Twitter infuriated.

Rupert made comments on the economic standing of black youth, claiming that they never save and spend their money at Taboo, a popular Joburg club, and on BMWs.

The businessman also claimed that "there are no leaders in your generation," saying that Steve Biko would never have been found in a nightclub.

After an evening of racial and tribal stereotypes, when accused of making racial remarks Rupert said: "People of my age group know I'm not a racist."

There were key moments where the businessman had to be corrected on his use of terminology, such as referring to black people as "blacks" and using terms such as "the snowflake generation".

Rupert also took several jabs at the EFF, referring to them as the "red-beret Vendas" and "comrades who buy their struggle uniform at Pepkor".

At some point after asking Rupert a question, Gauteng MEC of Education Panyaza Lesufi staged a walk-out.

Twitter was not impressed and called the interview a hot mess.

Rupert is outchea proving there is no correlation between intellect and wealth 👀
Tribal slurs, tribal stereotypes, racial stereotypes. You would think as someone who rarely gives interviews would give a quality interview on the rare occasion #RupertOnPOWER

I laughed when Rupert was angry that he is a racist. He even acted childish saying things like "I am happy not to help anyone and just sit at home with family and friends" #RupertOnPOWER

"blacks"
"Darkies"
"Shangaans"
"These Vhenda boys in red berets"
"All they know is Taboo, Sans, and BMWs"
"I have black friends"
"Tenderpreneurs"
"I'm not a racist"

- this is the cream of our private sector. This is what they think of us. Let that sink in.

I hate myself for watching. This grandpa is DISRESPECTFUL AF #RupertOnPOWER

#RupertOnPOWER wow! So #Rupert can only engage on his own terms! When people challenge him, he gets angry instead of engaging! The privilege was on steroids.

Can someone please tell Rupert his Shangaan jokes are not funny. I’m cringing and it’s only a few minutes in. #RupertOnPOWER

I can study hard, go to Taboo and drive a BMW but I still wouldn't get a banking license. #RupertOnPower #ChairmansConversation

Johann Rupert is a tongue slip away from saying black people are lazy and entitled. #RupertOnPOWER pic.twitter.com/iWnT4TeTw6

It might not delight those who see Stellenbosch as the crucible of white monopoly capital‚ but one of the Western Cape town’s scions has won ...
Business Times
3 years ago

Business tycoon Johann Rupert has weighed in on the contentious land expropriation debate  saying  there were  misconceptions about the matter, ...
News
4 years ago