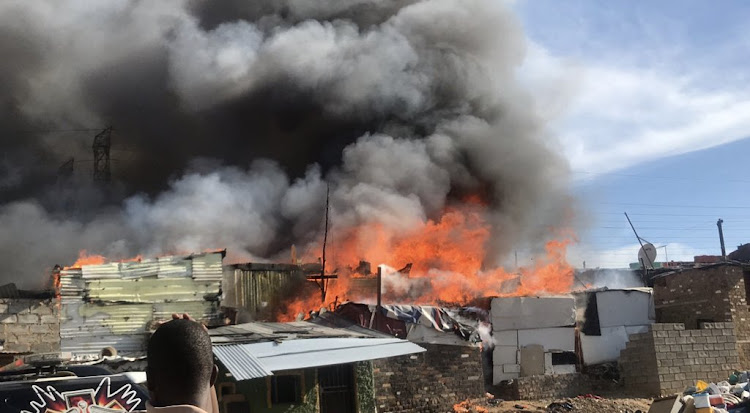 A fire that swept through Alexandra township destroyed more than 600 homes on Thursday afternoon.
Image: Twitter/CityOfJoburgEMS

The gates of a large church in Alexandra, Johannesburg, were shut and locked on Friday afternoon while residents of the Greenville informal settlement, which neighbours the church, were trying to salvage and rebuild their homes following a devastating fire.

"Changing millions of lives" was the slogan written on a large board outside the church premises.

"Whose lives are they changing when they refused to give help to destitute women and children last night?" questioned a resident who took TimesLIVE through the scenes of devastation.

TimesLIVE has chosen not to name the church as we have not had the opportunity to speak to its owners.

Help for Alex residents whose homes were destroyed in fire

Around 2,000 people are homeless after a fire spread across Johannesburg's Alexandra township destroying their shacks on Thursday afternoon.
News
3 years ago

The woman lives in another part of the township, but said she had arrived in the Greenville settlement on Thursday afternoon when the fire was still raging and had assisted residents with whatever she could.

"The church refused us entry into the premises," said one resident, Nokuthula.

"They even brought in a security company," said her neighbour, Zethu.

"So we slept at the hall in Eastbank. We were given blankets and mattresses and food. About 30 of us slept there," Nokuthula added.

Illegal electricity connection lines stretched from schools across the road to the now destroyed informal settlement.

But these electricity lines were not the reason for the massive blaze which left hundreds of people displaced. The fire is said to have been the result of arson.

As TimesLIVE made its way through the rubble, soot and smouldering corrugated iron sheets which had served as the walls of the shacks the residents had called home, different versions of exactly how and who had started the fire emerged.

The elderly woman who assisted us to manoeuvre through the ruins said she had heard that the fire was started following a love triangle. Another resident said the fire was a revenge attack at a thief’s home but that the plot had gone horribly wrong when the blaze had spread to their homes.

Johannesburg police are investigating a case of murder following the death of a man who was assaulted by Alexandra community members who had accused ...
News
3 years ago

Earlier, TimesLIVE reported that police were investigating a case of murder following the death of a man who was assaulted by community members who had accused him of arson.

According to police spokesperson Captain Mavela Masondo, the man was assaulted by the community on Thursday, after a fire ravaged more than 600 shacks in the township.

“The person is alleged to have started the fire. He was attacked by the community and taken to hospital, where he later died.”

But some residents told TimesLIVE that the man was not the one who had started the fire, but he was attacked because community members believed he was linked to the gang that had stolen laptops from people who were said to have set one shack alight, destroying their homes in the process.

The sight of a TimesLIVE reporter making her way through the settlement with a pen and paper in hand offered false hope to some residents who mistook her for a city official.

"Are you writing down our names for those of us who lost houses?" many asked as they approached her.

"Are you the one we should be giving our names to?" they enquired, seemingly under the impression that she was one of the city officials who were making their way through the informal settlement, taking their details, with a promise of assistance to come.

Premier David Makhura earlier visited the scene and told residents they would be helped.

About 500 shacks have been affected by a fire that broke out in Alexandra, Johannesburg, on Thursday afternoon.
News
3 years ago

As some locals started digging and hammering corrugated iron and planks to the ground, trying to rebuild their homes, others saw a business opportunity.

"Mkhukhu (shack) for sale" read a freshly printed poster plastered on one shack on the outskirts of the informal settlement.

But for many, buying a new property was currently an impossible task.

It was not only the shacks that were destroyed, but brick and mortar structures built in the informal settlement were also damaged.

Their roofs, mainly made of corrugated iron, had caved in and the blackened DSTV satellite decoders remained.

Meanwhile, the Gift of the Givers had erected several tents in the area, with several of their officials going around, assisting the residents.

Those who had no alternative accommodation were expected to take refuge in these tents overnight.

The locals who had already registered their names with city officials queued outside the Gift of the Giver tents, waiting to get their next meal of the day from the non-profit organisation.

Loaves of bread and soup poured into cups was on the menu on Friday afternoon.

Councillor Oupa Sefako of the EFF told TimesLIVE that according to their database, around 850 residents had lived there.

He was unsure how many had been affected.

Sefako said he was thankful to the Gift of the Givers but expressed disappointment with the EMS officials.

He claimed to have made calls to the fire brigade but was told that they had no fire engines.

Sefako said even when he had arrived at the EMS offices, he was told the same thing.

Asked how he felt about the church not opening its gates to the locals, he described them as "also being human", saying they would address this issue at a later stage. The pressing matter at hand, he said, was getting the locals houses rebuilt.

TimesLIVE spoke to one resident who said she was at work when she had received a call about the massive fire.

By the time she had arrived, the fire had consumed most of the area and it was impossible for her to go into her house to salvage anything.

The only clothes she was left with were those she was wearing.

The fire meant that she could no longer go home to the Eastern Cape for Christmas or buy anything for her children who were back at home.

I cannot go and rebuild anywhere else but I also can't live here right now.

"I cannot go and rebuild anywhere else but I also can't live here right now because the wall is collapsing. You feel it just when you touch it," she said of her destroyed brick and mortar home.

Only a handful of homes on the outskirts of the informal settlement survived the blaze.

"We had managed to take out some of our things just in case the fire comes our way," said a relieved resident whose home was unscathed.

"But it is really terrible what happened here and when the fire brigade came in, they couldn't make their way through the shacks because of the small spaces between the shacks," she said.

Although they were broken about having lost all their belongings, the residents said they were grateful that the fire happened during the day, thus no lives were lost as people were awake and others were at work.