Killer fires devastated many communities in the past few months 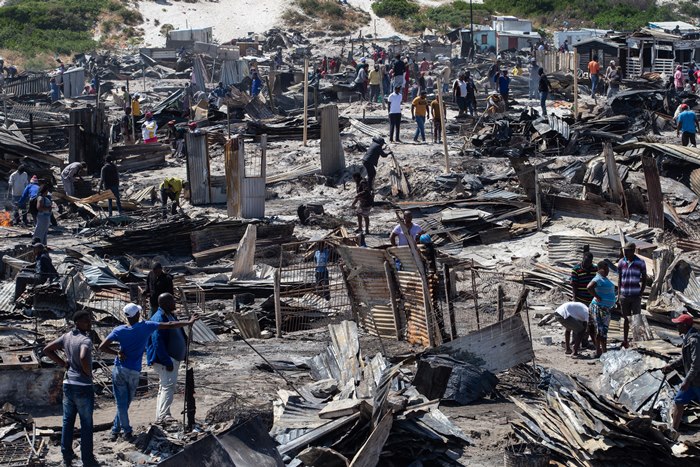 Vicious fires in communities and countryside have wrought devastation in many areas in the past few months alone.
Image: Ashraf Hendricks

From natural to man-made, wildfires have killed many people and destroyed thousands of homes and property worth billions of rands.

On Thursday, about 600 informal settlements were affected and 2,000 people left homeless after a fire broke out in Alexandra, north of Johannesburg.

A man accused of starting the fire died after allegedly being assaulted by members of the community.

Police spokesperson Capt Mavela Masondo told TimesLIVE that a case of murder had been opened.

The Alexandra fire is one of many that have destroyed the livelihoods of people in recent months.

In late November 2018, about 162 people were left homeless after 35 shacks burnt down at the Tsepetsepe informal settlement in Khayelitsha, Cape Town.

The fire started in a shack after the electricity box exploded and caused other electrical cables to burn.

In October 2018, also in Khayelitsha, one person was killed and thousands displaced when a fire broke out in SST Section.

The blaze was said to have left more than 4,000 people homeless.

Johannesburg police are investigating a case of murder following the death of a man who was assaulted by Alexandra community members who had accused ...
News
2 years ago

Nine deaths were reported as wildfires spread across Rheenendal, Knysna, in October 2018. Sunday Times reported that a family lost seven members, including a pregnant woman and five children.

The Garden Route fires spread across the southwestern Cape, raging through George and Tsitsikamma.

About 2,000 people were displaced and more than 92,000ha of vegetation destroyed.

Many parts of  California in the US were ravaged by wildfires that led to the deaths of 85 people.

According to Reuters, the fires started on November 8 2018, destroying more than 62,000ha of land and 14,000 homes in and around Paradise. The fires were eventually contained after two weeks of horror.

The California fires in heartbreaking numbers

As the California fires rage on, the death toll continues to rise and as many 1,000 people are still missing.
News
3 years ago