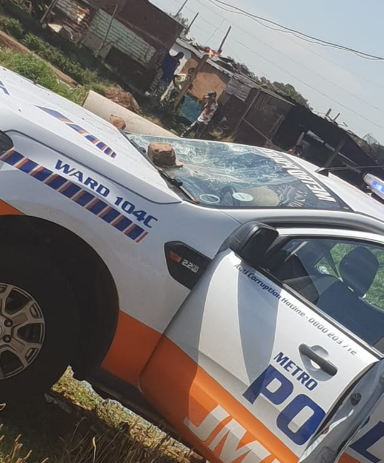 Officers in a lone Johannesburg Metro Police Department vehicle came under siege overnight after being called out to a noise complaint in Coronationville.

Twenty-three people have been arrested for the ensuing mayhem, said Michael Sun, a member of the mayoral committee responsible for public safety.

Sun tweeted photographs of the damaged vehicle, commenting: "Luckily it didn't catch fire" after the petrol-bomb was thrown. The front and rear windscreens were damaged after bricks were thrown at the vehicle.

Initially, Sun said, "15 thugs arrested" but later updated this to say 20 men and three women had been arrested.

"We will not tolerate attacks on our JMPD officers," said Sun, adding the suspects would face the full might of the law.

Metro police chief David Tembe commented via his Twitter handle: "We will not be intimidated by hooligans! Everyone's rights must be respected and lawlessness will not be tolerated in the City of Johannesburg."

Police cars came when more than 20 drunk thugs surrounded a lone JMPD vehicle outside Kiss Kiss at 3am which was making sure it stayed closed after reopening illegally. It cd have got v ugly. Respect to the JMPD for a very unthankful task. @AsktheChiefJMPD @HermanMashaba pic.twitter.com/eDPyzBgYmD

The Johannesburg Metro Police Department (JMPD) arrested a woman after she was found with a newborn baby hidden in a carrier bag in the city.
News
2 years ago

The Johannesburg Metropolitan Police Department (JMPD) has launched an internal investigation following allegations of non-adherence to the traffic ...
News
2 years ago

Johannesburg mayor Herman Mashaba made his first citizen's arrest on Monday after a man was pushing a trolley stacked with slaughtered cow heads in ...
News
2 years ago