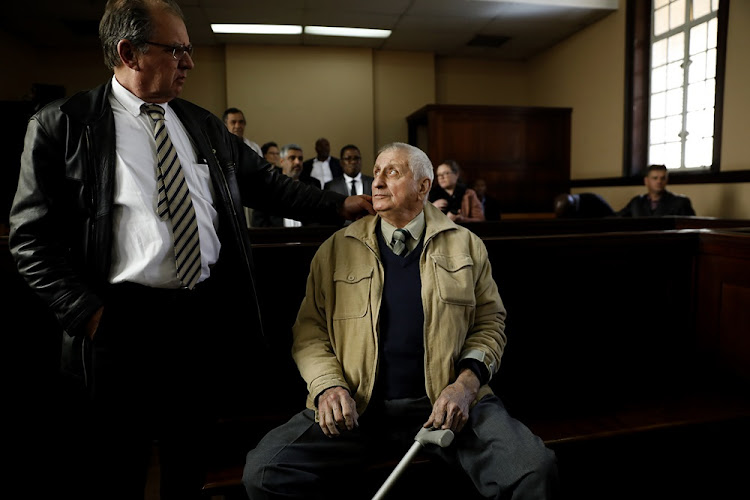 Joao Rodrigues, the apartheid-era policeman implicated in the 1971 murder of activist Ahmed Timol, at the Johannesburg Magistrate's Court on July 30 2018.
Image: ALON SKUY

The Timol family was on Wednesday admitted as an intervening party in the application by Joao Rodrigues, the former policeman implicated in the death of Ahmed Timol in 1971, for a permanent stay of prosecution.

The families of Dr Hoosen Haffejee and Matthews Mabelane wanted to be joined in these proceedings as they feared other victims of apartheid would be denied justice if Rodrigues’s application was successful.

The application by Rodrigues for a permanent stay of prosecution will be heard next month.

A trial date for Ahmed Timol murder accused João “Jan” Rodrigues has been set for January 28 in 2019.
News
2 years ago

Timol‚ an anti-apartheid activist, died in 1971 after falling from the 10th floor of the then John Vorster Square police station in Johannesburg, where he had been detained.

While the original inquest in 1972 concluded that Timol had committed suicide, the reopened inquest last year found that Timol’s death was caused by him being pushed.

It also recommended that Rodriques be investigated with the view to his prosecution.

The reopened inquest found that according to his own version, Rodrigues had participated in the cover-up to conceal the crime of murder as an accessory after the fact, and had gone on to commit perjury by presenting contradictory evidence before the 1972 and 2017 inquests.

Imtiaz Cajee, nephew of Ahmed Timol, described the ruling on the admission of the Timol family as a positive outcome.

Speaking outside the courtroom, Cajee said although the court dismissed an application by the other families to intervene, their objections would still be somehow represented by the Timol family.

"(The judge) made it very clear, that pertaining to the Timol family there has been an inquest, and there have been findings.  It would not make sense for financial reasons to have all different parties represented in this matter.

"I think judge [Ramarumo] Monama has made it very clear that [in the case of] all other victims’ families, like the Simelane, the Haffejee and the Mabelane families, their plight is covered when he granted the Timol family the right to be the intervening party."

Former apartheid era security policeman João “Jan” Rodrigues is due back in court on Monday to face charges relating to the 1971 murder of ...
News
2 years ago

The family of the late Pietermaritzburg anti-apartheid activist and dentist Dr Hoosen Haffejee have welcomed the state’s decision to reopen the ...
News
2 years ago