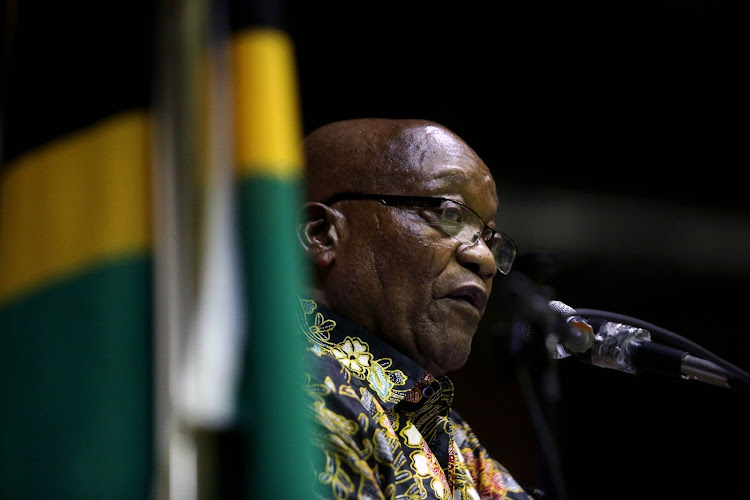 Former president Jacob Zuma has described Nelson Mandela as the most outstanding leader in the world, and a man who made an outstanding contribution to resolving South Africa's problems.

Zuma was delivering the Nelson Mandela Memorial Lecture at the University of Zululand on Wednesday. The lecture was organised by the King Cetshwayo Distict on the KwaZulu-Natal north coast as part of the centennial celebrations for the late stateswoman and ANC stalwart Albertina Sisulu.

Zuma, who arrived shortly after 4pm, was greeted by chanting ANC supporters who failed to fill the university's Bhekuzulu Hall to capacity as was expected given his popularity in the province - and the fact that the lecture took place in his home region.

It's already plain to see that Twitter is about to get interesting now that Zuma has joined.
News
3 years ago

Before delivering the lecture, Msholozi, as he is popularly known, burst out in his characteristic booming laugh after his supporters had welcomed him with the popular song "uMsholozi lo abazange bambone" (which translates to, "This is Msholozi, they have never seen him").

Zuma told his eager audience that there were many blessings and lessons from Madiba, for ordinary people as well as the ANC's leadership.

"Such was a life and such were times of Madiba that it is impossible to tell it all in just one occasion. You can talk one aspect of Madiba and speak a long time," he said.

He said attempts were made every day to use Mandela in many ways, including by speakers and writers who used his name to bolster their agendas.

"The most popular things they say about Madiba, more is to focus on elements of his rich character associated with the role of Mandela in the area of negotiations; that he was a good negotiator, a peacemaker and a reconciler."

Zuma said those who were opposed to Mandela's ideals and beliefs had labelled him a terrorist.

"They even called him terrorist number one. And also because they hated communists, they named him a communist with horns and a monster. This is how they described Madiba for a long time."

But Zuma said that once Mandela was out of prison those who hated him "loved him like an angel".

"He made an outstanding contribution to solve our South African national problems and did not live long thereafter because he passed away.

"All those who had been saying these things about him loved him like an angel. They in fact singled Madiba out as a wonderful man who belonged to a very bad organisation the African National Congress. They forgot that he was developed and shaped by the ANC."

Zuma said it was the ANC that was reflected in Mandela, as it was reflected in many other leaders of the liberation movement. He said some political parties had even used Mandela's name in their election campaigns.

"Madiba was a man who did things with dignity and greatest sense of caring. He emerged from our country to become one of the most outstanding leaders in the world. The UN did what it has never done before by declaring the birthday of Madiba as an international day of on which the people must do something for the period of his years spent in prison. There is no recognition you can look for except that was done by all countries 100% with no country abstaining or opposing recognising Madiba as a leader of the world."

Black Twitter gave the former president tips on how to make his stay on social media a long and happy one.
News
3 years ago