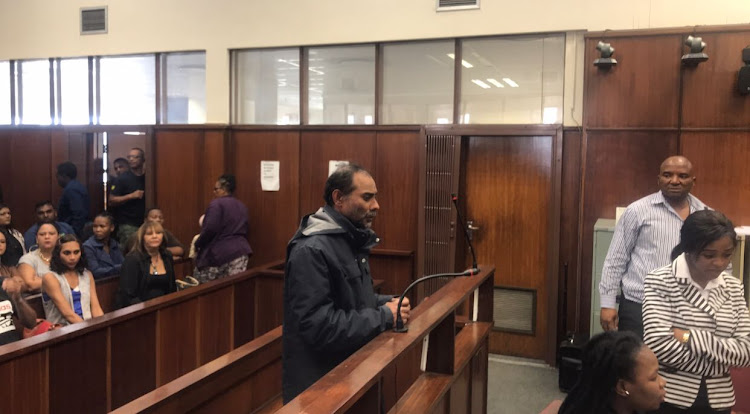 Mohammed Ebrahim — accused of the abduction and murder of nine-year-old Miguel Louw — is highly intelligent, devious and brazen.

That is how state prosecutor Kuveshnie Pillay described the the 43-year-old butcher in her closing submissions in his protracted bid for bail in the Durban Magistrate's Court on Thursday.

"He can be best described as devious and divisive. He is highly intelligent and has presence of mind when answering questions," she said.

Pillay’s impressions come after Ebrahim testified this week, proffering his own account of the last moments Miguel Louw was seen alive.

Louw disappeared after he was seen with Ebrahim and nearly two months after he vanished, his body was discovered in a thicket near Longbury Drive in Phoenix, less than 100m from Ebrahim’s family home.

Pillay said Ebrahim had been "economical" with what he disclosed in court.

"The state submits, with respect, the accused displays the attitude which is quite brazen and defensive in court as best being described as colloquially taunting the state by saying catch me if you can," she said.

The prosecutor had fired a barrage of questions at Ebrahim with his answers, she said, tailored to provide as little information as possible.

His evasive conduct had also been raised by magistrate Sifiso Luthuli, who evoked the blockbuster film Catch me if you can in looking at the strength of his evidence.

Postmortem expected to be vital in case against Miguel Louw's killer

A post-mortem examination of the decomposed remains of schoolboy Miguel Louw will be critical in the case against alleged killer Mohammed Ebrahim.
News
3 years ago

"Having seen the accused here in court, is his attitude not that the state must prove the case against him?" he questioned.

"Of course, he is entitled to that stance but is his attitude not ‘bring the evidence’ … like when he was asked why he did not tell the deceased’s mother about meeting the child after school and buying KFC, his answer was that she didn’t ask him. Now is that not indicative of his attitude that if the state charges me, they must prove my guilt?” Luthuli said.

"There is a movie Catch me if you can. Is he not adopting that attitude? Is he saying there is no evidence?"

Chris Gounden, for Ebrahim, was quick with a rebuttal, insisting that there was a clear inference that Luthuli had "prejudged" his client.

"I am just debating with you, the court has not adopted a firm view," Luthuli countered.

He defended his client’s omissions in the witness box, saying that many people answer questions in their own way and that he was responding to the "current situation".

A ruling on Ebrahim's bail request will be delivered on Friday.

On the day the parents of slain Sydenham boy Miguel Louw began a frantic search for their son, the man accused of his murder thought the abduction ...
News
3 years ago

The face of slain Sydenham boy Miguel Louw filled the gallery of the Durban magistrate's court on the shirts of friends and family who waited for the ...
News
3 years ago

Mohammed Ebrahim, the man accused of the abduction of Miguel Louw had to hide on Wednesday, as community members were waiting for him outside the ...
News
3 years ago