Taking the bull by the horns ... and slaughtering it 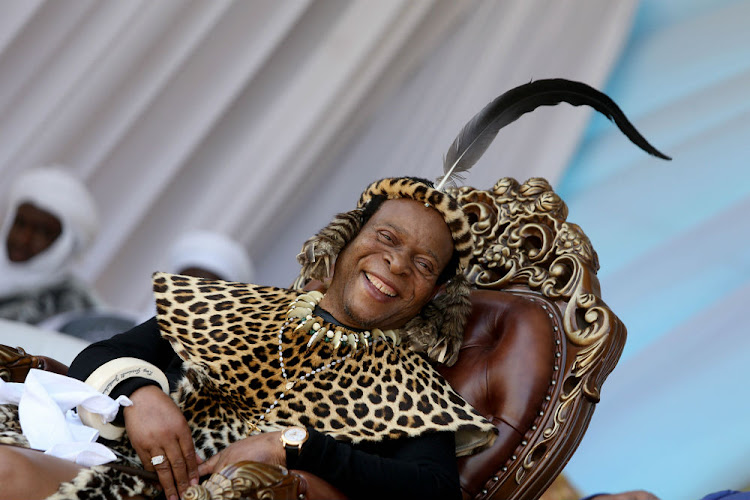 Zulu King Goodwill Zwelithini is set to host the Umkhosi Wokweshwama (First Fruits) festival at the weekend. The tradition is said to date back 3,000 years.
Image: Thuli Dlamini

The festival, which has courted controversy in the past after it was challenged by animal rights activists – albeit without success – will see young men kill a bull with their bare hands inside the kraal at the palace as a symbol of their bravery.

This ritual killing of the bull by amabutho (traditional Zulu warriors) is the major highlight of the festival. The animal is overpowered and its air passage closed barehanded. Its neck is then broken in a manoeuvre that causes a quick and painless death. No bloodletting of any kind is allowed nor is dismemberment part of the ritual slaying.

The annual traditional ceremony, which takes place in December, is a very symbolic occasion for the Zulu monarch who will eat the first produce and pray to God to bless the land to produce abundant good food for his people.

During the ceremony, King Zwelithini will spend some time in isolation, observing certain cultural rituals. The five-day festival is believed to provide the king with strength and power.

Zulu king slapped with lawsuit over land in KZN

Zulu king Goodwill Zwelithini‚ who is embroiled in a legal wrangle with racist guest house owner Andre Slade over the payment of rental arrears for ...
News
3 years ago

The king also uses the ceremony to talk to the nation, especially young men, about issues including the spread of HIV/Aids, moral regeneration, preventing abuse of women and children and how to conduct themselves as role models within their communities.

In the past few years, the festival — believed to be more than 3,000 years old — has come under fire from animal rights activists, including the Animal Rights Africa, over the ritual bull slaughter.

So intense has the negative sentiment been that, in 2009, Animal Rights Africa went to court in a bid to stop the slaughter of the animal after arguing that the ceremony was cruel.

The animal groups from Africa and Australia united in protest and circulated a petition in what was the biggest opposition to the traditional ritual resuscitated by King Zwelithini more than two decades ago.

They unsuccessfully attempted to petition former president Jacob Zuma, a staunch traditionalist, arguing that the practice was undignified and harmful to the country’s reputation abroad.

So desperate were the animal rights activists to stop the ritual that they even implored former US talkshow queen Oprah Winfrey to chastise the Zulu monarch.

This attempt to rope in Winfrey failed — as, ultimately, did their court case.

The judged ruled that no acts of cruelty were part of the ceremony, nor was it barbaric and inhumane cruelty to animals but was a feature of Zulu culture. He added that the killing of the bull was deeply symbolical of the great power that the king alone claims and was symbolised by the strength of the young warriors in overcoming the bull.

"I personally have witnessed the ritual killing of a bull during the Ukweshwama ceremony. The bull was put to death in the usual way by twisting and breaking its neck in the complete absence of the type of mutilation and acts of cruelty the applicants allege.

"In fact I cannot imagine how a speedy death could be achieved by the nonsensical acts of pulling out its eyes, ripping out its tongue, ripping its testicles off or trying to achieve the impossible by tying its penis in a knot. Nor do I imagine that anyone could realistically believe that a bull's death could be brought about by the kicks of barefoot adolescents. These acts have no place in Zulu culture and would not be tolerated for an instant," said the judge.

He dismissed the application with costs.

King Goodwill Zwelithini’s six wives are being  accused of being “madams from hell” by their drivers who have reported them to KwaZulu-Natal premier ...
News
3 years ago

At the time Peta campaigner Poorva Joshipura said Peta had received countless letters and calls from people in SA and around the world who wanted the "violent bull-killing ritual" to end.

Amid the outcry, former public protector Thuli Madonsela sent a representative to compile a report to determine the future of one of the oldest ritual ceremonies, but to no avail.

King Zwelithini was furious at attempts to ban the ritual.

"We are baffled by people who think that we have to explain to them what we do and why we have to do it … We do not need people to tolerate us, but for them to accept that we have the right to practise our religion as Zulus - and we will not stop doing it,” he said.

He had the backing of Judge Nic van der Reyden of the Pietermaritzburg High Court who expressed reservations in commenting on the matter, saying that the bull-killing ritual went to the heart of the Zulu tradition.

He likened stopping the practice to ordering Catholics to stop taking communion.

"This has been done for years. It is done by Zulus, who constitute the biggest population in this country," he said.

"They were not fully in favour of the lifestyle that we were living, which I found contradictory because they are supposed to be all about Zulu ...
TshisaLIVE
3 years ago

Addressing the contentious land question has been the central theme of the ANC’s weekend campaign blitz in KwaZulu-Natal, with cooperative governance ...
Politics
3 years ago

Mangosuthu Gatsha Buthelezi announced his retirement as president of the Inkatha Freedom Party (IFP) in late October 2017.
Politics
3 years ago