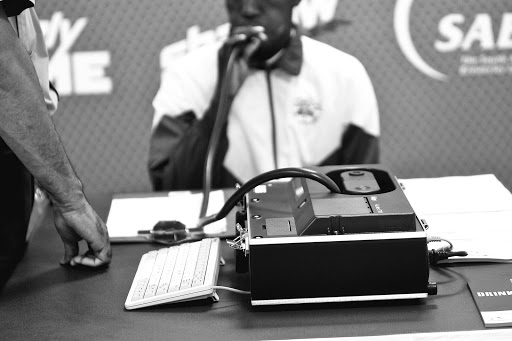 The Dräger Alcotest breathalyser is much bigger than a standard roadside breathalyser, and is the only device that can be used for court evidence.
Image: Moeketsi Moticoe

Transport minister Blade Nzimande said breathalyser readings taken on the spot would soon be used in evidence against drunk drivers in court instead of blood tests.

The minister was speaking at the preliminary road safety report in Pretoria on Tuesday.

The report revealed there were 767 fatalities on SA roads in 18 days from December 1 to December 18.

Most of the incidents were caused by excessive speeding, reckless and negligent driving and blatant disregard of road signs.

Nzimande also stressed drinking and driving incidents had increased, as did incidents involving fatigued drivers. The latter had caused some of the more serious accidents.

He said accidents involving fatigue were especially prevalent in drivers of large vehicles and those transporting groups of passengers.

The minister said although only a few vehicles were involved in these crashes, they were more lethal because they involved more people.

The report revealed 44 trucks and 34 taxis were involved in fatal collisions in the 18-day period.

He said a message needed to be sent to drivers that the department would not tolerate errant drivers as “they are killing people”.

He said breathalyser readings taken on the spot would be used in evidence against drunk drivers in court. “We will not wait for blood tests. This is exploited by the rich who use powerful lawyers to get out of jail.”

Nzimande had asked for an urgent meeting with the department of justice and the National Prosecuting Authority (NPA) to ensure serious cases involving violations of traffic law were prosecuted expeditiously to send a strong message to road users.

He also proposed an engagement with the department of trade and industry to review the trading hours of taverns and restaurants that sell liquor. “We believe the 2am cutoff time encourages binge drinking and increases the risk of road traffic crashes in the early hours of the morning.”

Traffic is expected to increase dramatically from Friday. The busiest traffic days are expected to be December 28 in preparation of New Year’s eve, then again on the weekend of January 5 as travellers return home for work and school.

Insurers don't have to 'prove' a driver was drunk to reject an...

The stats revealed 1,109 drivers had been arrested for drinking and driving during the 18-day period and that most pedestrian fatalities were recorded near places that sold alcohol.

Howard Dembovsky from the Justice Project SA welcomed the use of breathalyser results in court, but cautioned that the apparatus needed for evidence was a specialised Dräger breathalyser, and was very expensive.

“I think it’s a good thing. Breathalyser evidence will be the only way we can make progress [in curbing drinking and driving] because it means conviction rates will be high.

“But I just wonder how the minister proposes to do it because only a specific SABS approved Dräger breathalyser can be used which eliminates mouth alcohol and takes deep lung samples.”

Dembovsky said the apparatus cost about R200,000 each and that there were only six of the machines in Gauteng.

Numerous calls and queries to the minister as well as to the department spokesperson went unanswered.

Durban cops' stern warning to drunk drivers: We will arrest you!

There have previously been controversies around the Dräger breathalyser, which was banned in 2011 following the state v Hendricks judgment that saw it being withdrawn.

The judge found there were problems in some of the ways in which the Dräger device was used‚ leading to the acquittal of the accused who had been charged with driving with a breath alcohol level higher than the legal limit of 0.24mg a 1‚000ml.

But the judge also found breathalysers were a reliable means of testing for alcohol in a suspect and that they should be used as a tool to “eradicate the scourge of drunk driving for the betterment of society”.

In August 2016, the NPA announced the device would be back in use after a task team, which included experts the department of transport‚ the South African Bureau of Standards‚ the Western Cape Provincial Traffic Services and the Gene Louw Traffic College worked through the problems identified by the court.