WATCH | How not to drive! Five shock videos that show crazy road antics 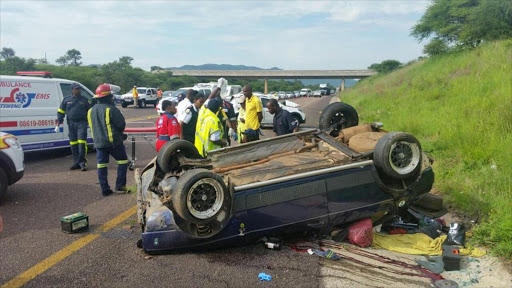 A familiar sight on SA roads. Here an allegedly drunk driver was involved in a gruesome crash on the N1 that killed a teenager and injured eight people in Limpopo.
Image: Arrive Alive

Throughout the year, authorities urge motorists to be careful on the country's roads.

Arrive Alive runs numerous safe driving campaigns calling for vigilance among all road users and  police are constantly trying to clamp down on drunken and irresponsible driving.

These calls grow louder over the festive season, when many South Africans hit the road for the holiday.

The festive season road accident death toll is mounting across the country after a series of deadly crashes.
News
3 years ago

Despite all these efforts, reckless drivers continue to cause death and injury to others. If you're looking for a lesson on how NOT to drive, take a look at these five videos from 2018.

In October a video went viral showing a biker standing his ground against a reckless taxi driver. To avoid heavy traffic, the taxi driver risked the lives of his passengers by driving on the wrong side of the road, into oncoming vehicles.

The defiant taxi driver and the biker get into an altercation, with the biker demanding that the taxi driver turn and drive in the right direction.

The video was taken using a camera mounted on the biker's helmet, and was later used by police to identify the offending driver and arrest him. He was found guilty of reckless driving and paid a R6,000 fine.

Also in October, a biker found himself chasing after a taxi that had knocked him off his bike. The incident happened in rush-hour traffic and was recorded by the biker.

In the video, the taxi can be seen driving off as if nothing had happened. The man quickly gets back on his bike and confronts the taxi driver, pleading: "You hit me!"

Shocking footage collected from cameras mounted on a truck shows two others trucks as they collided into each other back in October.

The driver of one of the trucks tried to overtake on a busy stretch of road - and the results were disastrous.

After smashing into a small vehicle, a taxi hit two pedestrians who were waiting to cross the street. One of them died.

The accident was captured by CCTV cameras near the Lifestyle Centre in Ballito, Durban over the weekend.

A passenger travelling on an Intercape bus from Cape Town to Durban recorded the driver recklessly overtaking other vehicles on a road where it was not safe to do so.

After the video circulated on social media, the bus company suspended the driver pending a disciplinary hearing.

As we head into the holiday season, when many people are driving long distances to spend time with friends and family, a large number of motorists ...
Motoring
3 years ago

N3 gears up for bumper volume of traffic

Two years ago, unspeakable tragedy struck Mabuyi Mhlanga’s family when her young daughter was hit by a car while crossing the road and died on the ...
News
3 years ago

It's (officially) summertime, and the traffic to the beach is building

Thousands of inland holiday-makers have started flocking to the KwaZulu-Natal coast, as the summer holidays officially kicked off on Friday.
News
3 years ago